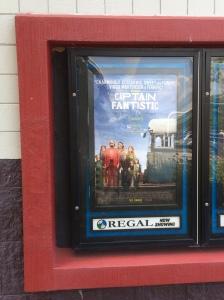 A few weeks ago my wife Sandy and I ventured out to see Captain Fantastic. It’s an oddly named movie and quite a good one. Captain Fantastic is a tale about a family, the Cashes, that for many years has been living in semi-seclusion deep in Washington State mountain wilderness. Why? Because Ben and Leslie Cash, early in their adult lives, walked out mainstream American society’s exit door. They were turned off by, and wanted no part of, the USA’s big business and big government, and the wasteful and extravagant lifestyles of many of their fellow citizens. Self-sufficient and resourceful in their wooded paradise, they have grown their own food, hunted animals and fruitfully made their way. And, via unorthodox and vigorous home schooling, they have passed on their beliefs, skills and knowledge to their progeny, all six of them, the oldest of whom, a son, is about 17. Part hippies, part isolationists, part radical thinkers, Ben and Leslie have helmed what ain’t your average family, to say the least. Average, no. Smart, book-loving and full of spunk, yes. In other words, very likeable.

I wanted to write a story about Captain Fantastic shortly after seeing it. The story definitely was inside me, pawing to get out, but it just wouldn’t congeal. Still, I kept thinking about Captain Fantastic a little bit now and then while hoping for the arrival of a special something that would set a zippy analysis of CF in motion. Such occurred recently when I heard a song on the radio, vocalist Annie Ross’ 1959 version of Give Me The Simple Life, an All-American standard recorded by many over the years (click here to listen). Harry Ruby and Rube Bloom wrote this number around 1945, meaning it to be a paean to modesty in one’s approach to living, to being happy with a small abode, basic possessions and the ones you love. As such, it would make a fairly decent though incomplete theme song for the Cashes. But Annie Ross took big liberties with the Ruby-Bloom creation. Someone, maybe she, penned some additional lyrics that turned the original song on its head. Turns out that Annie had been playing with us. “Here’s what I really want,” she in effect sang in the tune’s closing verses. “Plenty of dough, a Cadillac, caviar and really nice clothes.”

Ben and Leslie Cash, had they ever heard Annie Ross’ take on Give Me The Simple Life, would have shaken their heads knowingly. “That’s the American way.” they’d have said. “F*ck that. This mountain is where we belong.”

Ah, if only things were that clear. If they were, life would be a breeze (and there’d be little for moviemakers to make movies about). But, duh, circumstances change and situations develop. And people, if they are wise and with it, choose to or are forced to adapt. Or at least contemplate the possibility of adapting.

At the start of Captain Fantastc, we see seven of the eight Cashes in action. All but Leslie, who has been away from the household for several months, a hospitalized victim of mental and emotional disturbances. In her absence Ben is fully in charge, leading his troops through the same rigorous activities as when Leslie was present: killing deer, climbing rock walls, reading and discussing books, to name a few. The Cashes, if anything, are, with exceptions, very well-rounded. One day, though, bad news reaches Ben. Leslie, his soul mate, took her life. Apparently troubled for a long time, she had soldiered on till the pain grew too intense.

Leslie, in her will, left specific instructions as to how her death is to be observed and how her body is to be disposed. The Cashes’ quest to honor her wishes takes them off-mountain, where they ram hard into modern American life. For the Cash offspring, supermarkets and video games and big houses, all of which they encounter, are disorienting. And for Ben, the temporary immersion in society makes him look at his kids anew. He and they love their mountain home, but is it ultimately a prison for the children? To truly blossom might they need to live among their countrymen, at least in some modified manner?

Plot-wise, I’ll say no more. Now it’s gripe time, which I’ll keep very short by mentioning only one of several quibbles: Maybe I missed something, which is likely, but I didn’t come away with a good understanding of when or why Leslie’s mental problems developed and grew. I thought that the presentation of this subject was more than a little confused and hard to follow. Like me.

Which awkwardly leads me to note that for eons I’ve been amazed by how many good movies are written and/or directed by persons whom I’ve never heard of before. That’s a reflection of the amount of talent out there, and also shows that I’ve got miles to travel if I ever hope to get back in the loop. All of which is a delayed way of saying that Matt Ross wrote and directed the good Captain. As for actors who do a great job, well, everyone shines in Captain Fantastic. Viggo Mortensen, whom I do know about, gets far more screen time than anyone else. He has no trouble revealing the many moods and facets of Ben Cash. And George McKay too is wonderful. Previously an unknown to me, he plays Ben and Leslie’s sweet and low-in-certain-life-experiences oldest child.

(Don’t be shy about adding your comments, or about sharing this article with others)

14 thoughts on “Not Your Average Family: A Review Of Captain Fantastic”