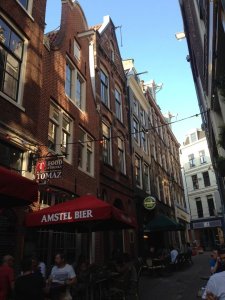 You know, when earlier this summer I showered cyberspace with a three-part recap of my wife Sandy’s and my recent European frolics, I thought I was done with that subject. Next thing I knew, though, I was typing out a story that had its genesis during that same trip, in Amsterdam. In said story (which is viewable by clicking here) I wrote about the owner of a bistro we had dinner in. The restaurant’s name is Tomaz, and possibly the owner’s name is that too. But seeing that I don’t know for sure, I referred to him in the piece as Maybe It’s Tomaz. Man, I can’t believe it, but I’m about to talk about MIT again. Obviously it’s a good thing I met the guy, because he has become fodder for your frequently-devoid-of-story-ideas narrator. MIT, if by some fine miracle you ever read this post or the previous one in which you star, please know that I’m in your debt. Figuratively, not financially. Anyway, I’m certain you’d feel fully compensated by basking in the limelight that my epic tales place you within. Well, maybe limelight is too strong a word, considering that this blog is among the least-read publications on Planet Earth. Nevertheless, write I must. Or must I? I’ll have to think about that.

MIT became part of this article’s thought process the other day while I was listening to WXPN, a sharp radio station based in Philadelphia. They play so much music from so many genres, and know so much about music, it’s amazing. And the station always is trying to come up with cool ways of packaging its product. For example, during the other day that I mentioned, they hit upon a great idea. For hours on end they played only short songs. Short meaning under three minutes.

Now, I’m no music historian or researcher. My brain capacity, not to mention my patience, isn’t sufficient to take on either of those roles. However, I’m pretty sure that, before the hippie era bloomed in 1967, the bulk of recorded songs were under five minutes, and oodles of those — the truly short ones — topped out beneath three. This partly was due to the limited storage capacity of vinyl singles and albums. And there also were commercial considerations. Namely, if songs were short, then pop/Top 40 radio stations would be able to play a sizeable number of them per hour and still have plenty of time left over for ads. Things loosened up in many ways in and after the late 1960s, including the length of songs. To this day though, some still don’t surpass the three-minute mark.

OK, as with much of life, all of that is neither here nor there. Or is it? I’ll have to think about that one too. Getting back to WXPN, I listened on and off the other day for a total of an hour or so and was pleasantly blown away by all the great tunes that they spun. I’ll name a few (if you click on each title you’ll hear the songs). The Lovin’ Spoonful’s Do You Believe In Magic?. Paul McCartney’s Man We Was Lonely. The Box Tops’ The Letter. Patsy Cline’s I Fall To Pieces. Remember (Walking In The Sand) by The Shangri-Las. Each song has a wonderful melody, an alluring arrangement and is packed with feeling. And each satisfied my soul completely and then . . . bam! . . . was over just like that. They are perfect.

Would MIT have loved the XPN playlist as much as I? Let’s see. As Sandy and I ate in his restaurant, MIT and I gabbed away about music. Like me, MIT is a music nut. MIT piped sweet stuff through the restaurant’s speakers by Harry Manx, Jonathan Wilson and Israel Nash, artists I wasn’t familiar with (examples of their work are embedded in the aforementioned article in which MIT appears). The songs were on the long side (six minutes and up I think), transporting and satisfyingly spacey. And were, said MIT, typical of what he mostly listens to nowadays. He made a point to say that a song’s length, not just its style, was part of his selection method — he was into music that took its time telling a story. I liked the Manx, Wilson and Nash numbers. A lot. If I hadn’t been involved with swigging beers and downing a steak dinner, I might have laid my head on the table and gone on a magic carpet ride. Yes, I imagine that MIT would have said “yeah, terrific” about WXPN’s focus on the short the other day, but would have turned off the station after a bit and gone to Spotify or wherever to get his massive daily requirements of the long.

What’s my point, then? Good question. I’m likely to nab the trophy awarded to “The Person Who In 2016 Made The Most Obvious And Lame Observation” for the upcoming sentence, but here goes anyway: Music, as everyone knows, can be a joy and an inspiration and a release. (Oy. Let’s continue). The need for music is somehow built into the human genome. And my guess is that the need’s long form is the dominant gene. Really, not much is better than closing your eyes during a worthy, lengthy number, letting the sounds wash over you and take you on a journey. That’s true whether you’re listening to recorded music at home or on the go or grooving at a concert. On the other hand, there’s no denying the rush that just might overtake you from good songs that are oh so brief and tight. Me, I’ll keep listening to both the short and the long. And to whatever’s in between too.

(Don’t be shy about adding your thoughts, or about sharing this article with others)

22 thoughts on “The Short And The Long Of It: Scattered Thoughts About Music”