Philadelphia’s Mann Center For The Performing Arts is a great outdoor concert venue that can be a bitch getting to and leaving from, depending on where you live and what mode of transport you opt to use. The Mann, built into a hilly section of enormous public parklands, is decently accessible for those who reside not too far from it and who visit using foot power or public transit. Not so for just about everyone else. That’s because just about everyone else drives. For them, the traffic jams they usually run into and the post-concert nightmare of trying to exit the parking areas at the same time as thousands of their fellow citizens . . . oy frigging vey, to say the least. In the early 1990s, an incredibly awful Mann traffic experience sent my now-wife Sandy’s and my blood pressures to Guinness World Records levels. And, amid the type of shouting matches in the car that would have made us stars on The Jerry Springer Show, nearly caused us to divorce one another, even though we weren’t even married yet! Shell-shocked, we stayed away from The Mann for eons after that memorable night. Until a week and a half ago, that is, when we learned about a pleasant method of Manning-it, and took in a terrific show.

The concert-in-question’s headliner was Bonnie Raitt. The opening act was Richard Thompson. Double bills as strong as this one are not everyday events. Sandy and I were there with our great pals Cindy and Gene. The two couples ended up sitting in different sections of The Mann, but arrived at the scene in the same vehicle. Turns out that SEPTA, the Philadelphia region’s transit authority, runs a dedicated bus on Mann concert nights. Sandy and I never knew about this till Cindy clued us in. And thus we took a train from our home in the burbs to central Philadelphia and hopped on the special bus soon after arriving in the city. Several stops later, Cindy and Gene, Philadelphia residents, hopped aboard too. Mannward we headed. Calmly.

Raitt and Thompson are pushing 70 and, judging from the crowd at The Mann, don’t exactly have a huge fan base among Generations X and Y. Despite this, they can sell plenty of tickets. Between them they stimulated about 6,000 bodies to lay down dough for seats the other night. As opening acts are prone to do, Richard played first. I’ll come back to him soon, but have decided to say a few things now about Bonnie Raitt. 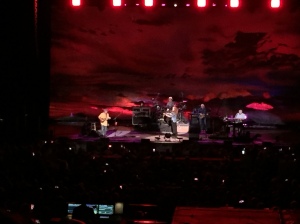 For two hours Bonnie was on stage with her backing band of four (drummer, electric bassist, keyboardist and electric guitarist/mandolin player), a well-oiled and flexible machine. She was wonderful. Bonnie’s music goes down easy and brings together currents of the blues, singer-songwriter, rock, gospel and folk music streams. She is famed for her electric slide guitar work, but to me, to tell you the truth, she seemed not a guitar slinger. And she didn’t emphasize her songwriting efforts. Though she has written or co-written a decent number of songs during  her 48-or-so-year career, she hauled out only two of them (What You’re Doin’ To Me and The Comin’ Round Is Going Through, both from her new album Dig In Deep ) for her 20-song set. What she had going for her, more than anything, was her voice. Warm and natural, Bonnie’s pipes drew the crowd into each song’s lyrics. And, without strain, she belted out whatever needed to be belted out whenever the occasion arose. I held on tight when I knew that high and powerful notes were a-comin’, expecting to be swept up into the clouds. And that’s what happened. Her voice may have burnished oh so slightly since her younger days, but basically Bonnie sings as well as she ever has. Which is saying something.

Take John Prine’s Angel From Montgomery, for instance. This song about a beat-down elderly woman began with only Bonnie and her acoustic guitar. She sang majestically, probing Prine’s chilling narrative. Halfway through the tune the rest of the group entered. Ricky Fataar’s cymbal and high-hat work was simple and quiet and appropriate. George Marinelli’s mandolin solo was sweet. Goosebumps, I think, swelled throughout The Mann, whose audience jumped into a standing O, the evening’s second, at Angel’s end. You will find a recent live version of the song by clicking here.

I have a feeling that most people have heard of Bonnie Raitt, and that far, far fewer know about Richard Thompson, though his abilities are extraordinary and his career long (he was a founder of the British folk-rock band Fairport Convention in 1967). Me, I believe that RT is one of the greatest musical talents among us. What a singer. What a songwriter. What a guitar player. In a fair and just world he’d be a megastar. Poor guy, he has to settle for truckloads of praise instead of ocean liner loads, and for making a really nice living instead of raking in countless millions. Life’s tough.

Well, if I ran The Mann, BR would have opened for RT, not the other way around. Forty-five minutes of him and his band (Taras Prodaniuk on electric bass, Michael Jerome on drums) weren’t enough. Sandy and I have seen Richard in performance a number of times, and he hasn’t lost a beat. His steely, deep voice cut like a knife at The Mann. His electric guitar playing snarled, jabbed and tunneled into realms so dense he left me in disbelief. During some RT solos, Sandy said she thought I was going to give myself whiplash, what with my head pivoting and swiveling so much. Such as on his piercing song If Love Whispers Your Name, during which he went atomic on his guitar (click here for a version of this tune from three years ago, and note that RT’s long, amazing guitar solo begins at about the 3:20 mark).

Back to Bonnie. She is more than a Richard Thompson supporter. She said to the audience that he is one of her heroes, and brought him onstage in the middle of her set for two songs. In case you were wondering, the guy has a delicate side that adroitly examines life’s heartbreaks and mysteries in some of his quieter compositions, such as 1952 Vincent Black Lightning and Dimming Of The Day. To be sure, Dimming Of The Day is a remarkable creation. When in the correct hands it will stun you. Which is what occurred when Bonnie and Richard, each working an acoustic guitar, intertwined their voices in a heavenly manner and, totally deservedly, received the evening’s first standing O when Dimming’s final notes slipped into the air. A beautiful version, from some years ago, of Bonnie and Richard performing Dimming Of The Day exists on YouTube. By clicking here you will see what I mean.

(Don’t be shy about adding your thoughts, or about sharing this article with others)