The answer was staring me in the face, but it took a while before registering with me. There I was the other day, pawing through the nooks and crannies of my mind in search of the next topic for my blog. I was in the mood to write another of the impressionistic, ruminating pieces that have been rolling off the assembly line pretty regularly the past few months. Trouble is I hadn’t had any mini-adventures of late that I could wrap any impressionistic ruminations around. That’s when I turned my thoughts in a different direction, a cinematic one. My wife Sandy and I had taken a trip recently to a local theater where we sat close to the screen, figuring that doing so would help us become one with the movie’s charms if what we were about to see turned out to be as good as we were hoping it would. 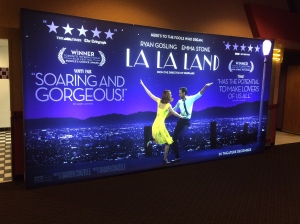 Which is a longwinded introduction to my announcing that I have some thoughts to impart about La La Land, a musical that came out at the tail end of 2016 and now is in wide release throughout the States. This, to me, is a great movie. An example of near-perfection. An alluring and enticing creation that deserves the viewership of all who have good hearts and soft spots therein.

Yeah, I’m prone to gushing. That’s OK. There are worse ways to be. And when it comes to La La Land I’m not the only gusher by a long shot. I don’t read a lot of movie reviews, but the reviewers whose words I took a look at fell hard for this one. Sandy, who is more tuned in than I to a lot of things, confirmed that seemingly everyone carrying the title of critic had pointed their thumbs upward after watching La La Land.

What, then, do we have here? La La Land is a girl-meets-boy story. And, when well done, that template is boffo, isn’t it? Hey, I hear a few of you in the back of the room murmuring “nah.” Get out! Class is dismissed for you.

La La Land’s girl is Mia (Emma Stone), an aspriring actress caught up in the confidence-squashing eddies of the audition mill. The boy is Sebastian (Ryan Gosling), a sensitive-fingered jazz pianist scrambling to make a living while dreaming of the day he opens his own jazz club. Mia and Sebastian first cross paths on a Los Angeles freeway. The freeway, witness to a traffic jam from Hell, becomes the stage for the movie’s opening sequence, a lilting and athletic song and dance routine unfurled by scores of traffic stuckees who exit their vehicles to sing and jump and prance giddily on car roofs and hoods, making the best of what normally would be a real bad situation. Finally, the tangle of metal and tires begins to ease up. But Mia, slow to gun her engine, becomes the victim of relentless horn blasting from someone in a car behind hers. Sebastian. To which she responds by flipping the bird at him as he pulls out and breezes by. Take that. fella!

Needless to say, things become better between Mia and Sebastian when, as fate absolutely would have it, they unexpectedly meet again and again in The City Of Angels and realize that they are meant for each other and destined to fall in love. Which they do. But will love endure? La La Land, though bright and frothy much of the time, isn’t that way all of the time, so the answer to the question is far from a given. Damien Chazell, La La Land’s writer and director, throws more than a few dollops of darkness and pain into the mix. La La Land is a colorful, romantic bonbon laced with the realities of life. 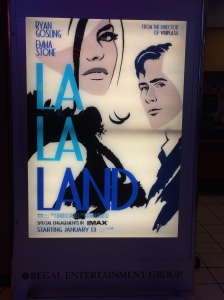 It didn’t take long for me to fall under La La Land’s spell. Stone and Gosling possess the type of feels-right screen chemistry that often is elusive. Their Mia and Sebastian banter easily with one another, before the day arrives when cracks open in their relationship, and the two stars sing and dance in a sweet and natural manner. The songs (music by Justin Hurwitz, lyrics by Benj Pasek and Justin Paul) that they and others emit are strong and tuneful. And sometimes piercing, as is the case with the stream of consciousness-like Audition (The Fools Who Dream), sung by Mia/Stone at a, natch, movie audition. And La La Land is filled with sequences so gorgeously done I felt honored to be watching the flick. Especially when Mia and Sebastian, at Los Angeles’ Griffith Observatory, take each others’ hands and begin to dance, soon lifting from the floor to merge with the cosmos projected on the observatory dome’s underside.

You don’t see a whole lot of original movie musicals, which La La Land is, anymore. Or musicals based on stage productions either, for that matter. Both varieties used to be a staple of the film industry, but that was eons ago as measured in cinematic years. Don’t know why they’ve faded away. I mean, who doesn’t love The Wizard Of Oz, Singin’ In The Rain, An American In Paris, Cabaret . . . ? In any case, I left the theater thinking that La La Land is up there with those titans. You have to give it to Chazelle, who also scripted and directed 2014’s Whiplash, a nerve-wracking, music-themed opus that decidedly isn’t a musical. The guy has immense guts to have attempted La La Land, not to mention the vision and skills to pull it off. And he’s only 32. My God, when I was his age I hadn’t even mastered tying my shoes yet. Come to think of it, I still haven’t.

Well, I could go on but I won’t. You get the idea. If you haven’t already seen La La Land, make a date.

(Don’t be shy about sharing this article or about adding your comments. Thanks)