Very recently I was driving through a supermarket’s enormous loading dock area, located in the rear of the store, on my way to the even more enormous customer parking lot out front. Near the loading docks was a small truck, part of the Amoroso’s Baking Company fleet, delivering rolls to the market. Amoroso’s rolls are legendary in the greater Philadelphia region.

Well, I knew I should have stopped to snap a picture of the truck, because its exterior sides were canvases smashingly designed and painted. Rolls and logos never looked so good. But I didn’t. However, those brief moments in the truck’s presence popped an idea into my head. It wasn’t a world-class idea, but few of mine are. And so I’ve run with it. The idea? To locate great-looking trucks (and vans, as it turned out) whose images would grace and anchor a story I’d write about seeking and finding beauty in the paved-over and ultra-developed land that comprises my suburban Philadelphia surroundings.

I’ve whined a bunch of times before on these pages about the anywhere-USA look of much of where I live. Around here, indoor malls, strip malls, gas stations and office parks rule. But amid all these many eyesores, I realized after ogling the Amoroso’s truck, were works of art on wheels. But how to scout them out? Swiveling my head to watch them as I zipped along the road at 30 or more miles per hour didn’t seem like a game plan to follow. I drive distractedly enough as it is. 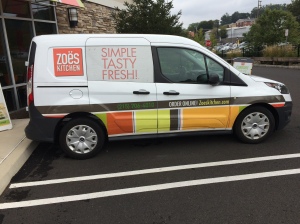 The solution of course was to troll, while in my car, shopping places’ parking and delivery areas. Which is what I did two Fridays ago, sticking within three miles of my abode and devoting two hours to the enterprise. I came upon some gems. It’s awfully possible that nobody anywhere ever has been on this mission before. If so, I beam broadly. At last I may qualify for admission into some Hall Of Fame or other.

In addition to trucks and vans, I also discovered during my excursion that the local police have telepathic powers. Twice, I say twice, I was pulled over, while en route from one shopping province to another, and ticketed for driving with idiotic intent. When I receive the official summonses, I’m going to represent myself in court.

“Your Honor,” I’ll say to the judge, “give me a break. I’m a blogger, a pseudo-writer struggling to churn out story after story. I swear, the pressure is getting to me! It’s driving me half-insane, which, come to think of it, maybe isn’t all that bad seeing that I was already one-quarter insane before I started my blog.”

‘Your Honor,” I will continue, “I know that this notion to write about pretty trucks was grasping at straws. But it’s the best I could do. Your Honor, I’m begging for mercy!”

I can picture the judge staring at me quizzically and sternly. “Take this fool away,” I can then hear him saying to the court officers. “Four months in the county jail will do him good.”

Yikes! I’m in deep shit. I need to wrap up this article and start planning my escape. So here’s the rest of the story:

Most commercial trucks and vans, as we know, are vanilla, being unadorned or uninspiringly painted. But some are cool as can be, decorated with fine designs and pictures, and with colors that rock or calm, depending on the business’s targeted audience. Andy Warhol probably loved looking at boffo trucks on Manhattan’s streets. That would have been expected of he who delighted in the sight of snappy Brillo boxes.

In addition to the beauties and one example of vanilla, I’ve placed an image of somewhat-cute vanilla into this story. It is the vehicle belonging to Mike’s Taxidermy. I don’t know why Mike didn’t paint some examples of his craft on his truck. He should have. I won’t hold that against him, though. In fact, when my pet groundhog Dig-Dig eventually expires I plan to have Mike stuff and preserve him. I then will sit Dig-Dig in the middle of my backyard so that my memories of him never fade from my mind. 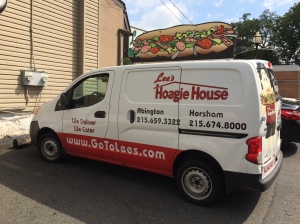 In closing, let me say that I find it a tough call as to which truck or van grabbed me the most. Was it the van belonging to Lee’s Hoagie Shop? That hoagie on its roof clearly is rad. Or the truck delivering Bassett’s ice cream? Man, those scoops of ice cream are tantalizing. Or the Kreider Farms vehicle? It’s a true looker. 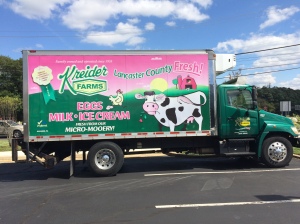 A decision is required and is at hand. My vote goes to Kreider Farms. I am in love with the pink sky and soft yellow rising sun. And I admire the perfect balance of the design elements. Whoever created the picture is one talented artist. And she/he possesses a good sense of humor and a good heart too. Look at that cow! Talk about adorable.

Folks, that’s about it. Thanks for reading. And be sure to check out those fine trucks and vans out there in your neck of the woods. They’re everywhere!

57 thoughts on “Trucks And Vans Made My Day: Art On Wheels”