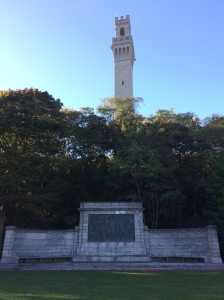 Let no one declare that I don’t follow up on my threats, for here I am at my writing desk penning another story about Cape Cod, just as I intimated I might do in my previous essay (click here). For those of you who have read more than enough about the Cape on these pages over the last two years, now’s a good time to turn your attention to a different sort of activity, such as sending one of Hallmark’s What The Hell Is Wrong With You? cards to Donnie Trump. But please promise to return to check out what I have to say next time around . . . unless it too turns out to be a Cape opus. In which case I give you my permission to send one of those cards to me. 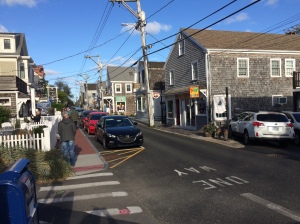 Provincetown’s village section (as opposed to Provincetown’s enormous and mostly uninhabited areas of beaches, woods, marshes, sand dunes and sand valleys that separate the village from the Atlantic Ocean) — that’s what I had in mind to write about after strolling along many of its streets for several hours a couple of weeks ago. I was in P-Town, as those in the know call it, during my wife Sandy’s and my annual Cape Cod vacation. Our home base was Orleans, about 25 miles away. 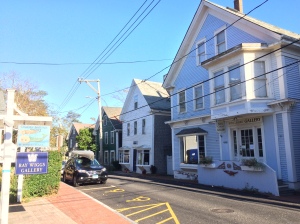 I meandered very contentedly, snapping a bushel or two of photos and figuring I probably would have little problem turning the excursion into a blog-worthy piece. But as one and then two and then three days following the jaunt went by, no satisfactory story slant entered my mind.

Remarkably, panic-prone me didn’t panic. Instead I took a few deep breaths, dropped to my knees and prayed to the blogging gods for assistance. “Get up, you schmuck, before you hurt yourself! Did you forget that you’re about as flexible as a baseball bat?” they immediately shouted at me. I rose slowly, creaking like an ancient wooden chair. “Okay, that’s better. Listen, you definitely should write about your Provincetown amble. But put the Pilgrim Monument near the center of the story, because you’ve always loved the Monument more than anything else in Provincetown. That’s the best advice we can give you.”

Hey, they were right. The Pilgrim Monument, located just two blocks from Provincetown village’s central area, is a stunner. And when I’m Cape-side it’s in my thoughts or pleasing my eyes a fair amount of time. That’s because I admire its enormous size and equally enormous aura. I mean, it’s got presence up the wazoo and seems almost supernatural to me, so unlikely is it in appearance compared to all that surrounds it. The Pilgrim Monument is the stolid, solid and protective alien creature that Provincetown and the rest of Cape Cod didn’t know they needed until it was erected in the early 1900s.

Provincetown village is charm personified. And it was made for strolling. Lovely, sea-sidey houses abound. As do more-polished abodes with beautiful gardens, and art galleries and food venues ranging from grab-a-bite to haute-cuisine. Not to mention funky stores of one kind or another that, with the galleries and eateries, run along Commercial Street, P-Town’s main shopping drag, and to a lesser extent along the village’s other lengthy artery, Bradford Street. And you’d have to possess a heart made of granite not to be beguiled by Provincetown Harbor, whose waters are fed by gargantuan Cape Cod Bay. The harbor is but a stone’s throw from Commercial Street.

The small and smaller streets in Provincetown, which occupies the far tip of Cape Cod, never cease to amaze me. Some are half-hidden, some little more than cubby holes — good luck ever finding those again if you fail to jot down exactly where they’re located. All of that suits me just fine, as I’m a fan of the whimsical. I’m also a fan of  peace and quiet, and things were real tranquil during the day in question. Artsy, open-minded and gay-friendly Provincetown, population around 3,000, is overrun with visitors and vacationers during the summer, but not so in autumn, which is when Sandy and I plant our temporary roots on the Cape.

Fifty minutes into my exploratory venture, I caught a glimpse of that which the blogging gods suggested I focus on. Despite its being 252 feet from toe to head (it’s by far the tallest structure on vertically-challenged Cape Cod), and perched on a hill to boot, you can’t see the Monument from everywhere in town. Trees and buildings, though nowhere near as tall as the Monument, commonly obscure the view. But as I got closer to the old soul, I sought out perspectives that partly or fully brought it into my field of vision. I especially liked the way the Monument, three or four blocks away at that point, stretched its torso above a Gulf gas station’s sign on Bradford Street.

Funny thing about the Pilgrim Monument. It was created to honor the Pilgrims who voyaged in 1620 from England aboard the good ship Mayflower and helped colonize these here United States. They made their first landfall in what would later be known as Provincetown, before moving on soon after to a permanent home, across Cape Cod Bay, in Plymouth.

You’d think, then, that the Monument’s basic design or at least its adornments would acknowledge the Pilgrims or the Mayflower or the European settlement of the States. A plaque near the Monument takes care of those matters, but not the Monument itself. The decision was made to pattern the Monument after a bell tower that was built in the 1300s in the hilly, landlocked Italian town of Siena. Huh? Wha? An Italian tower in a bohemian New England fishing village? But as it turns out, for me anyway, the Monument’s fish-out-of-water aspect, not to overlook its stateliness, makes it the brightest star in town.

There are other reasons why I enjoy the Monument as much as I do. I find it more than cool that the tower is visible from miles away along certain sections of Cape Cod Bay. Though it’s only twig-sized from those vantage points, I feel good knowing that it’s there. And more than once I was gassed to see the big guy poking up its head while I was scampering in the aforementioned Provincetown sands just outside the village.

But more than anything, I get kind of weak in the knees when I’m near the Monument at night. When the Sun goes down, lights illuminate the giant. I don’t know, I guess I’d have to say that the nighttime Monument is one of the finest sights I know of, not only beautiful but curiously otherworldly. As my afternoon in Provincetown segued into night, I stared more than once at the Monument. And took a couple of pictures. One of them is the money shot.

45 thoughts on “A Monumental Provincetown Story”