One of the things I like about writing stories for this here website is that the process sometimes leads me to examine the way I live my life, to notice my tendencies and to become more aware of my likes and dislikes. In other words, I’ve come to get a better, more organized sense of who I am since I began pecking away at my computer’s keyboard two and a half years ago, launching this blog into heavenly cyberspace.

And who am I, you ask? Holy crap, you think I’m nuts enough to lay myself bare in this article? Well, maybe I am that nuts, but I’m going to restrain myself. Instead, I plan to leave all of the juicy details for the blockbuster memoir that I’ve just now decided to begin work on soon. Do, Re, Mi Mi Mi Mi Mi will be its title. In it you will learn all there is to know about mi . . . I mean, me.

Gentle readers, I apologize for the detour. Where was I heading? Ah yes . . .

Surprises. Pulling my thoughts together while writing stories has made me fully realize that I like surprises. The good ones, that is. Not the bad, an example of which would be having Donnie Trump knock on my door on Halloween night and yell BOO! at me at the top of his lungs. That miserable motherf**ker wouldn’t even need to wear a devilish costume. In civilian garb he’s more than frightening enough.

Good surprises came my way quite a few times during the Cape Cod vacation that my wife Sandy and I indulged in last month. They weren’t of the knock-your-socks-off variety, but I found them hip in a modest sort of way. And here’s the thing: Sandy and I have explored Cape Cod’s territory so relentlessly over the 20 years that we’ve been vacationing there, I no longer expect to come upon something that I deem to be cool and that I also haven’t seen or experienced in ages, if ever. But as they say, you never know. Let’s take a look at the two incidents that startled my eyes the most. 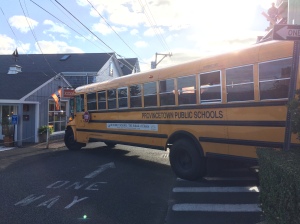 Sandy and I were in Provincetown in mid-afternoon on the twelfth day of October, ambling along Commercial Street, one of the town’s two main drags. The air was warm and the Sun, though fairly low in the sky, was ridiculously bright. I must have been lost in a daydream, for it was only at the last minute that I became aware of a very large orange and black object, a school bus, taking up all kinds of space in fairly narrow Commercial Street and also in Law Street, the really narrow side street from which the vehicle’s driver was attempting to make a right turn.

The driver was in a tough situation. If he had continued to bear right he’d have delivered a mighty blow to the building occupied by kmoe, a high-class wares establishment. How would the driver, who had only inches of wriggle room, get out of his predicament? Would he get out of it? I was fascinated by the spectacle. It struck me as not only comical but bordering on the surreal, giddily out of place in quaint, artsy, cute-as-a-button Provincetown.

Well, if it had been me behind the wheel, I shudder to think what might have ensued. No doubt Provincetown soon would have been saying a eulogy for the picket fence across Commercial Street from kmoe and/or for the shrubbery a breath away from the bus’s rear. And kmoe itself would have had to close for extensive renovations.

In the end, thankfully, all was happily resolved. With assistance from a good Samaritan who took up position in the middle of Commercial Street and provided verbal and hand-gesture guidance, the bus eventually was freed. Hallelujah!

Why in the world, though, had the bus been on Law Street? Provincetown has more skinny streets than Imelda Marcos has pairs of shoes, and they ain’t welcoming to anything bigger than a pickup truck. The bus driver must have been zoning out or simply in the mood to add some dollops of excitement to an otherwise placid day. I’ll never know.

Sixteen days later I decided to go for a fairly long hike along some Atlantic Ocean sands. The rented house that Sandy and I called home, in the town of Orleans, is oh so close to the ocean, so I stuck my feet into a pair of sneakers and headed out the door.

By way of an ocean inlet I reached Nauset Beach in a handful of minutes. It was a lovely day, on the warm side, and the ocean waters, in the midst of low tide, were pretty calm. I strode southward with little in mind except to enjoy the views and to nod and smile like a good neighbor at whomever I crossed paths with. And I had my eyes open for seals, as they commonly cruise in the ocean on their way to the sand islets, just offshore Cape Cod’s southeastern coast, that serve as safe havens for them. I didn’t notice any of those creatures though. I did, however, dig the sight of a small group of seagulls that were in shallow water, a pebble’s throw beyond the mud flats left behind by the low tide. They seemed very cool, calm and collected.

After 30 or 40 minutes of all of this I made the command decision to reverse direction and find my way home.

It was during this return journey that I noticed a couple of folks sloshing around in the mud flats. Throwing aside all concerns about dirtying my bright white sneakers — hey, I’m nothing if not a manly man! — I began to slosh around too, enjoying the heck out of the day. I moseyed northward in the flats, and with each step my admiration for their soppy, primitive beauty grew. They needed to be documented, so I pulled out my iPhone and got its camera ready. I positioned myself just so, the Sun to my back, and was about to press the button. But what was that dark image that had entered the scene? I blinked twice before realizing that it was my shadow, a shadow of someone readying to snap a photograph.

Was it possible that I’d never noticed my own shadow on a beach before? If I had, I didn’t recall the prior occasion(s), which isn’t too unbelievable considering the sieve-like consistency of my cranium’s contents. In any case, I recognized the fact that the design, a most unexpected addition, enhanced the loveliness of the mud flats. I pressed the iPhone camera’s button. And it is with the resultant photograph that I now take my leave of you.

Till next time, amigos.

(Don’t be shy about adding your comments or about sharing this story. Thanks,)

(If you click on the photos, larger images will open in separate windows)