Man, I don’t how they do it. They being the book bloggers I’ve come across who not only read an incredible number of books — three and up per week — but somehow also find the time, and have the brain power, to write sharp and detailed reviews about them. My little ol’ head spins madly just thinking about those folks’ accomplishments. Even in the days of yore when I read books aplenty I’d never have been able to follow them up quickly with well-plotted, good quality commentaries. Uh-uh. That kind of mental grandeur and endurance I do not possess, and never did. To put it a related way, my thoughts do not exactly flow in structured torrents along my neural pathways to my typing fingers. Hell, I’m lucky if a writing session produces 150 words that fit together in a useable manner. All I can say is that I stand in awe of those book bloggers. To repeat, I don’t know how they do it. (Lynne LeGrow, whose blog is called Fictionophile, is an example of what I’m talking about. Click here to find her blog.)

I bring up all of this partly because this is the first opus I’ve written that touches upon my book-reading activities. As I alluded to moments ago, I used to consume more than my share of books, especially in the 1970s and 80s. Leafing through a list that I’ve been keeping since 1970, I see that I knocked off 45 volumes in 1971, for instance, and 59 in 1983. The latter is my highest-ever yearly total.

Alas, my bookish endeavors came to a grinding halt in February 2015 when I reached the final page of Birds Of America, a collection of cool short stories by Lorrie Moore. That’s when the dark months set in, months marked by so much fretting about my place in the universe and in the kitchen, I became a cowering wreck. Books could wait. Oh well, it might have been worse. Like, if Trump had been elected president. What? You mean he is president? Holy crap! Let me outta here!

But the dark times didn’t last forever. Quite amazingly, quite unexpectedly, a few weeks ago I found myself picking up a book that had been hanging around the house for a pretty long while. I ran through it in five or six days. And one day after finishing it I headed to a local library and took out a work that I almost immediately set upon. Two days later I reached its end. Bravo, Neil, bravo! Back in the book-reading saddle I am, and probably will remain there for a decent spell. 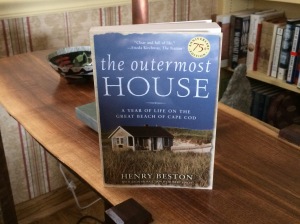 Book number one, The Outermost House, by Henry Beston, was right up my alley. In fact, it is surprising that I hadn’t turned its pages ages ago, as it is set on Cape Cod, a locale I’ve gotten to know and crazily love over the last 20 years. The Outermost House describes the months (autumn 1926 till autumn 1927) that Beston spent living in semi-solitude, housing himself in a two room cabin in the dunes of Cape Cod’s raw and wild Atlantic Ocean coastline. Many times I’ve trod on the very sands and wetlands that grabbed hold of Beston’s heart and spirit.

Beston’s book has become one of the so-called classics, remaining in print since hitting the marketplace in 1928, and apparently still selling pretty nicely. I loved it. Beston writes gracefully and has an eye for subject matter that you don’t frequently cross paths with, such as his lengthy descriptions of the differing types of sounds made by the ocean waves and surf. Next time I’m on The Cape I’m going to have his book in hand as I investigate some of the observations that his keen senses and abstract mind came up with. I won’t be able to check out his cabin, though. A violent storm in 1978 destroyed it.

Now that I think about it, I believe I had the notion in the back of my head for a while to reacquaint myself with books, and that I knew I’d have book-reading success only by taking baby steps. By which I mean I wasn’t about to tackle monsters like Dickens’ David Copperfield or George Eliot’s Middlemarch, both of which ain’t that far from the 1,000 page mark. No, whatever I was to read would have to be short, and The Outermost House fit the bill just fine. Its 218 pages are endowed with a large typeface and spacious margins. Perfect. So, I seized the moment and gave the dark months a hardy wave goodbye.

As with The Outermost House, short also needed to apply to the next book I opened if I were to have any hope of establishing a bit of book-reading momentum. Which is why I bow to the memory of the late Penelope Fitzgerald, whose remarkably slim The Means Of Escape, an okay-but-could-be-better short story collection, became the second title I conquered this month. I tell you, a more ideal specimen for length-phobic and trepidatious book readers would be hard to find. You want short? Hey, The Means Of Escape numbers only 117 pages, and a bunch of them are blanks that separate one story from another. The pages that actually contain printed words total a very genial and genteel 96. My kind of book, for sure!

On the living room sofa I began to gloat about my accomplishments to my wife Sandy as the final pages of The Means Of Escape drew within sight. “Can you believe it?” I said. “I’m about to finish my second book in a nine or ten day period.”

Oh yeah? I beg to differ. Was it sitting on a library shelf? You bet it was. Does it have a front and a back cover? Damn straight.

(Don’t be shy about adding your comments or about sharing this article with others. Or about signing up to follow this blog. Thanks.)

39 thoughts on “Keeping It Short (A Story About Books)”