It was a dark and stormy night . . . hold on, that line sounds familiar. I think I may have lifted it from someone inadvertently. Wouldn’t want to do that. I’m going to put it into Google and see what gives. I’ll be right back.

Yes, indeed. The sentence was penned about 185 years ago by an English novelist whom nobody alive today ever heard of. In that sense he’s just like me. Let’s start over.

It wasn’t a dark and stormy night. Well, it was dark, but it wasn’t stormy. In fact the sky was quite clear. But it was a bitterly cold Saturday night, no doubt about that. As in 12° F. My wife Sandy and I had just eaten dinner in a tavern we like in the Philly burbs. As we soldiered through the parking lot to our car, the night air laughed in my ear. “Man, you sure are a nitwit for going out in weather like this,” it mockingly said, keeping its voice low so that Sandy wouldn’t overhear. “Didn’t anyone tell you that it’s cold outside?” It’s surprising the things you learn as you get older — before that frigid evening a couple of weeks ago I never knew that the night air could talk, let alone be a sarcastic jerk. I kept my mouth shut, but next time I’ll be prepared with a snappy retort.

Ten minutes later Sandy and I arrived at our post-dinner destination, Montgomery County Community College. It’s located in the once-bucolic town of Blue Bell. Modest in size and scope, MCCC isn’t where one would expect to find a world-class performing arts series, but such is the case. Many times over the years, Sandy and I have seen top-of-the-line musicians and modern dance troupes in the series’ 400-seat auditorium.

It was good getting out of the cold. We settled into our seats at 7:45 PM and awaited the singer whom I’ve known about for a few years but never had seen in person. Ruthie Foster, she who drinks from the wells of blues, gospel, soul and folk music, and who is one of the prides of musically-rich Texas, USA. Ruthie, in her early 50s, is an in-demand artist. She regularly plays in the States, Canada, Europe and sometimes Australia. Let me mention one important point before I forget: Ruthie is a gifted vocalist with a gracious and likeable stage presence. If she passes through your area, and if you enjoy music of the sorts I mentioned above, you would do well to attend her concert.

Showtime arrived. Ruthie Foster walked onstage with three musical compadres: Samantha Banks (drums and other percussion), Scottie Miller (piano and organ) and Larry Fulcher (electric bass). Electric guitar was not in the house. Ruthie strummed an amplified acoustic guitar, but she knew her limitations on the instrument and ventured not a solo during the show, leaving most of them to Scottie and a couple to Samantha and Larry. Would the band have gained from having an additional member, to wit a high-flying electric guitarist? No way. His or her absence kept things lean and uncluttered, and placed Ruthie’s vocals at the center of center stage.

The show began with a rendition of Patty Griffin’s When It Don’t Come Easy, a tune about love’s elusiveness. The tight machine that was Ruthie’s band set a perfect rhythm and constructed elastic boundaries over which Ruthie spoke the truth. Bap-bap-bap-bap went Samantha Banks, sure-footed and steady on the drums, as she was all evening long. Larry Fulcher’s bass lines floated here and then there but never lost their way. Scottie Miller pushed and probed on the piano, at the appropriate times sending out blasts of emotions. The band was aware, focused and nimble on this and every song that followed. 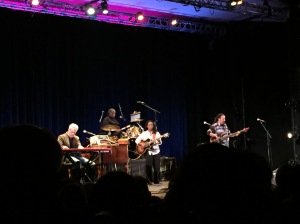 A few words about Ruthie Foster’s singing voice. It is wonderful, as is the way she uses it. She sings cleanly and clearly, unstrained and vibrato-less, always in control. And she can move easily to a hush or to a soulful barrage of notes. The timbre of Ruthie’s voice often reminded me of Bonnie Raitt’s, but Ruthie’s is fuller and better — Bonnie I’m certain would agree. At concert’s end, 90 minutes from the starting gun, I was convinced that Ruthie is one of the big talents in her field. What’s more, she sings songs that contain real meaning. Songs about tolerance, equality and hope. Such as the concert’s hope-centric third tune, a recent Foster original titled Brand New Day. It dripped with gospel fervor. “Love heals and love lives/And time will reveal a brand new day,” Ruthie proclaimed as her three pals, playing their instruments all church-like, vocally urged her along with harmonized “uh-huh, hoo” after “uh-huh, hoo.” Uh-huh, I loved it.

Let me say a few more things before I hit the “publish” button to post this article. Ruthie has written quite a few songs over the years, but kept her set list heavy with compositions penned by others. She chose numbers, for instance, by June Carter Cash (Ring Of Fire) and Lucinda Williams (Fruits Of My Labor). And she closed the show with  Stephen Foster’s Oh! Susanna, an American chestnut from 1848. (Click here to watch her perform Oh! Susanna two years ago). For that final tune she was alone on stage for the only time during the show. She sang slowly, picking comfortable notes on the guitar. As the song progressed her voice soared effortlessly, poignantly. Oh! Susanna took on meanings that I’d never thought about before. She made a great song greater.

(If you enjoyed this article, don’t be shy about sharing it. Sharing buttons are below)

(Photos by Sandra Cherrey Scheinin. If you click on a photo, a larger image will open)