I speak nothing but the truth when I say that I’ve never paid much attention to the Golden Globe Awards, which are honors bestowed upon the film and television industries. (I’m not anti-awards shows, by the way, being a lifelong Oscars devotee.) However, two news flashes are in order in regard to that opening sentence: 1) Hardly anybody gives a shit about what I do or don’t pay attention to, which is entirely as it should be. 2) Many millions of people pay a good deal of attention to the Golden Globe Awards, which may or may not be as it should be.

Recently, though, for the first time ever I did spend a few minutes looking online at the nominees and winners from the Golden Globes event held on January 6. That’s because I was curious about how much overlap there would be between my choices for 2018’s best flicks and the choices of the folks who vote for the GGs.

There wasn’t a ton of overlap. The Globes nominated 20 films (five nominees in each of four categories: drama; musical or comedy; animated; foreign language). I saw only six of them, of which I thought highly of three (A Star Is Born; BlacKkKlansman; Isle Of Dogs). And as for the winners, I caught but one: Green Book, good but not special in my estimation, won in the musical or comedy division, though in my view it isn’t a member of either of those genres. It’s a drama with light comedic brushstrokes. Whatever.

Also bringing home the bacon at the GGs were Bohemian Rhapsody (drama), Spider-Man: Into The Spider-Verse (animated), and Roma (foreign language). I have a feeling that I’m going to love Roma when I see it. As for the latest Spidey affair, there’s almost zero chance that I’ll fit it into my schedule during my remaining time on Planet Earth. Bohemian Rhapsody, though, definitely is on my radar screen.

So much for the Golden Globe Awards, then. The time now has arrived for me to pen some thoughts about my nominees for best picture and about why my winner from that pool captured the top spot. Caveat: Even though I’ve seen a lot of movies — 32 — that were released in the USA during 2018, there’s no question that numerous good ones didn’t pass before my eyes. But you can’t see everything. Away we go.

Of the 32, a few, such as The Death Of Stalin and On Chesil Beach, stunk up the joint mightily, in my modest opinion. But most of the others were enjoyable, some remarkably so. And a small group were not only highly enjoyable but thought-provoking and poignant too. It’s those three characteristics that elevate them into my Best Films Of 2018 category. Here they are: The Hate U Give; The Insult; American Animals; BlacKkKlansman; The Rider; Leave No Trace. Three others (Eighth Grade; First Man; Can You Ever Forgive Me?) came awfully close to making my list, but six is more than enough for me to deal with. 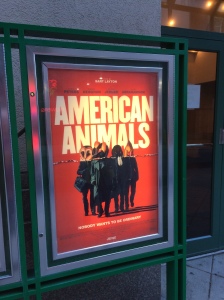 That sextet is a very fine group. I mean, these are thoughtful, carefully-crafted movies. The Insult, filmed in Lebanon and subtitled, peers at the societal and familial ramifications brought about by two men’s stubbornness and unchecked emotions. BlacKkKlansman and The Hate U Give throw American racism right smack into your face. American Animals, about which I’ve previously written (click here), is a depiction of screwy, exciting people on a crazy quest. Their quest kept me nervous as hell.

The final two flicks, unlike the four just mentioned, are enveloped with calmer vibes. A quiet, contemporary tale set among Native American cowboys, The Rider matter-of-factly and movingly presents tragedy and love in equal measures. And what about Leave No Trace (click here to read my earlier comments about it), in which a father and his teenage daughter, living off the grid, eventually have to decide how far into society they will venture? Well, among other things, it absolutely broke my heart.

When I began tossing around ideas for this article, I thought it would be difficult for me to select a winner. Turns out it wasn’t. Only one of the nominees has popped into my mind semi-regularly since I watched it. And although each of the six got to me in one or more meaningful ways, the depth to which Leave No Trace penetrated leaves no doubt that crowning any other movie would be oh so wrong. Leave No Trace, I bow before your powers.

At the start of Leave No Trace, directed and co-written by Debra Granik (who notched those same credits for 2010’s excellent Winter’s Bone), dad Will (played by Ben Foster) and daughter Tom (played by Thomasin Harcourt McKenzie) are doing their best to keep away from organized society. They live in a makeshift campsite deep within an Oregon public forest, where they forage and hunt. Will, an emotionally and psychologically damaged war vet (he probably served in Iraq and/or Afghanistan, though we never find out), has chosen this life for them. But he’s not a hopeless case, not when it comes to Tom, who is the apple of his eye and for whom he’d do just about anything. And Tom’s feelings for her father are as deep as his are for her.

As might be expected, though, time and the legal and social welfare systems catch up with the duo. After evaluations by social workers, Will and Tom are placed into a soft corner of the real world. The second half of the movie is an elegant laying out of their responses to their new circumstances. The movie’s end, sad and profound, yet life-affirming in a sense, just might break your heart as much as it did mine.

Okay, I’m about to bid you adieu, but first I have to state the obvious. Namely, it’s as clear as a bright, sunny day that no one movie is the best of 2018, or of any year. Everyone has their own opinions. The Golden Globes picked their 2018 winners, and I’ve picked Leave No Trace. I’d be very interested to know which films, from 2018, you think stand out from the rest, or any other thoughts you have about movies. So, please don’t be shy about adding your comments. Gracias. Goodbye till next time!