Like everyone, I’m anxiously awaiting the day when a vaccine is created that puts an end to the pandemic that has sent us into the twilight zone. It will be fabulous to ditch the f*cking masks and gloves that make us look like weirdo safe crackers. Better yet, getting together with friends and relatives will be back on our agendas, and the outlook will be fair or better for those businesses that were able to survive the dark times. Until that day arrives though, the overall picture, I believe, will continue to be anything but pretty.

Fortunately, life has been okay for me and my wife Sandy since coronavirus struck our part of the USA in March (we live near Philadelphia). Nowhere near as okay as it used to be, but okay enough. You adapt as best you can, after all, and try to deal with reality decently.

Among other things, the pandemic has forced me to make major adjustments to time allocation, as many of what had been my normal, much-enjoyed activities are only memories right now. That’s because, for health and safety reasons, my volunteer jobs were suspended and most of the usual outside-the-home entertainment choices that Sandy and I indulged in (socializing, cinemas, music venues, restaurants, museums) are unavailable, for now anyway.

So, how have I, a lazy septuagenarian, been filling the 16 or so hours of freed-up time each week? Well, for one thing, the living room sofa and I see more of each other than ever before. Upon its sensuous cushions I while away the time, alternating between scratching my balls and twirling the five strands of hair that remain on the crown of my head. Yes, I’m proud to report that my fellas are hanging in there okay, considering my advanced age, and that the strands of hair look damn studly. Thanks for asking!

Now, the scratching and twirling account for about nine of the 16 hours, and largely are confined to mornings and afternoons. What about the other seven hours? In a word, television. You see, in early April I really began to miss the kicks I’d been getting for ages at concerts, cinemas, etc. This ol’ boy needed to get entertainment from somewhere. And I wanted to do that with Sandy, my partner in kicks-experiencing for lo these many years. Television was the obvious outlet.

It’s not that I’m a stranger to the tube. In fact, I once was a highly dedicated viewer. But that ended about 12 years ago. Since then I’ve watched TV mostly in shortish sessions and mostly late at night, compulsively and expertly flipping channels. That pattern now has expanded. Yeah, I’ve retained the late night regimen. But, in addition, several evenings a week at around 8:30 or 9:00, Sandy and I head upstairs to our bedroom, which contains the bigger and better of the two TV sets in our home. We then proceed to lose ourselves for an hour or more. Doing so is nothing new for Sandy, who always has racked up admirable numbers of evening hours in front of the home screen. But, as noted, it’s been more than a while for me.

And you know what? I love it! Laughing, gasping, oohing and aahing together has been fun. Together, of course, is the operative word.

And what have we watched? Good movies, such as The Two Popes, The Wizard Of Oz, Saving Mr. Banks,  and Standing In The Shadows Of Motown. And a not-so-good one, Roma, which won an Oscar as 2018’s best foreign language film but which left me blank. 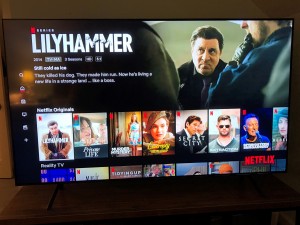 And entertaining series, two of them (Modern Family and Curb Your Enthusiasm) on network and premium-channel television. The others (Sherlock; Lilyhammer; After Life) were on Netflix, which has become one of my greatest pals. Man, we tore through the Netflix series zestfully, usually chowing down two episodes per sitting (no binge-watching for us, though. Maybe Sandy has the energy for that, but I don’t). And we’ve only scratched the surface of what the Netflix library holds. 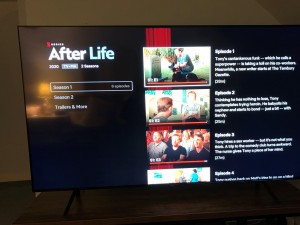 Yes, without a doubt we’ll keep watching TV together till outside-the-house entertainment opens up, and probably not stop even then. I’ve learned that there’s a whole lot to be said for TV togetherness. I used to know that, but had forgotten. So, at least one positive development has come out of the pandemic.

Girls and boys, in conclusion let me say this: The last few months have been disorienting to most, probably all, of us. What adjustments have you needed to make as a result of coronavirus’ far reach? How do you spend the extra hours that you might have found yourself with? Finally, which shows and movies have you been watching on TV? I’d be glad to hear your thoughts about any or all of these items.