Nobody is ever going to mistake me for a botanist, that’s for damn sure. By which I mean that I don’t know shit, basically, when it comes to plants. Yeah, I can identify a few trees and flowers. And I might exclaim “hey, there’s a fern!” when I see one. Beyond that, however, please don’t press me.

Nonetheless, I enjoy spending time outdoors among flora. Who doesn’t? We all want our minds to be expanded, if not blown, you see, even if we know it only subconsciously. And what better way to allow this to happen than to initiate close contact with Nature’s fibrous wonders, absorbing their good vibes?

With that in mind, on the morning of April 27th I eased my aged ass from the living room sofa, hopped, more or less, into my car, and drove to a pretty neighborhood in a nearby town. Specific sorts of flora — flowering trees — not only were on my mind, they were the reason for my mini-expedition.

I’m not sure why, but I didn’t pay much attention to flowering trees until fairly recent years. A big oversight on my part. Since then, though, I’ve made it a point to check them out in April and May, which is when they do their unfurling thing in my part of the globe (I live in Pennsylvania, USA). Their blossomy performance is, of course, a winner. What’s not to like about shades of, primarily, pink, purple and white? Those hues sure liven up the green-dominated landscape around here this time of year.

What’s more, knowing that the performance doesn’t last forever imbues it with poignancy. Poof! — before you know it the petals are gone. Until a new production is staged the following year.

Well, I wandered through the neighborhood for an hour, gazing at the flowers on magnolia, cherry, dogwood and other trees. They looked good. After 30 minutes, though, I found myself disappointed by the relatively modest numbers of those trees. At least half of the properties I passed that day contained none at all, in fact. Man, how cool would it have been if I’d seen 10 or 20 times as many? Very. The blossom experience then would have overwhelmed and enveloped, like an ecstatic fireworks display. 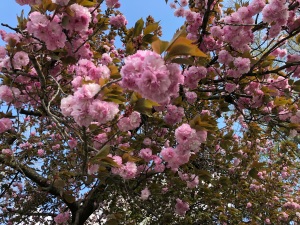 And so, with intensification as my goal, over the next half hour I got much nearer to the flowers than I had previously during the walk, within inches in most instances and nose-to-nose twice. The strategy worked. From those vantages the blossoms made a hell of an impression, intricately designed and decidedly gorgeous as they were. And they instantly became my friends, wanting only to please. “Hello, Neil,” they whispered, “thanks for visiting. We’re at your service.”

“You’re the best,” I whispered back.

“But don’t linger, old timer,” they added. “You won’t be a happy sightseer if someone storms out of their house, yelling at you to get the f*ck off their property.”

True! Thus, I kept my up-close-and-personal sessions short. Thank you, blossoms, for having my back.

Sitting at my computer keyboard now, a number of days after the events described above, I’m wondering what came over me halfway through the stroll, as I’d never felt let down before by any aspect of springtime. Maybe the rotten state of affairs in the world — Russia rearing its ugly head; the growth of fascism in many nations, including my own — was wearing on me, putting me in need of big jolts of beauty. In any event, I’m back to my normal self. Grumpy, as usual, but appreciative too.

Let’s close the proceedings with a tune that, title-wise, is a perfect match for this essay. I discovered it a couple of days after my close encounters with flowering trees. Ordinarily I’m not a big fan of bouncy songs. But the more I listen to Cherry Blossom, by pop and country star Kacey Musgraves, the more I like it. Beneath the sugar and gloss it has a strong layer of soul. Likening herself to a cherry blossom, Kacey hopes and prays that her relationship with her new boyfriend, whom she’s mad about, will hold, that the wind won’t blow her away. I’m pulling for her.