After the Thanksgiving affair that my wife Sandy and I hosted last week, I really am feeling thankful. Thankful that the big day is over and that (hopefully) I won’t see the guests again for a long time. Never again would be ideal.

What with most of our family scattered around the world, far from our suburban Philadelphia home, and what with our friends chowing down elsewhere, Sandy and I, as usual, were reduced to inviting only the three cousins who live near us — Tom, Dick and Larry — to sit around our dining room table on Turkey Day.

Tom, Dick and Larry are from my side of the family. I never can keep straight precisely how they are related to me. Third cousins twice removed. Or second cousins thrice removed. Something like that. Whatever the blood connections may be, several things are definite: These guys are suspicious characters, unmarried and without girlfriends, and never receive Thanksgiving invites from anyone else. I won’t delve deeply into describing how thoroughly they distressed me last week. Let’s just say that after Tom glared at me 20 minutes into the meal and hissed “pass the gravy . . . or else,” I came this close to soiling my Mickey Mouse-emblazoned boxer shorts. Holy crap, I’m very thankful that didn’t happen! One painful hour later the meal was over and five minutes after that the boys were on their way home. Unsafe travels in the future, fellas.

Now, I pride myself on being not too concerned about lucid juxtapositions. One of these days maybe I’ll set aside my wobbly ways, but that day hasn’t arrived just yet. Which is why I, without embarrassment, now turn away from a Thanksgiving fantasia and toward something entirely unrelated. Its name is The Florida Project. It’s a movie, one that I thought only relative handfuls of people were visiting the theaters to see. But I was wrong about that. A quick look at Box Office Mojo reveals that TFP is in a substantial number of cinemas in the States. It deserves to be. The Florida Project is superb, a piercing examination of human plight. I caught it a couple of weeks ago, am thankful that I did, and can’t get it out of my head.

The Florida Project, though scripted, has the feel of cinema verite. Episodic, it follows the lives, day after day during one summer, of several young kids and their parents who call the Magic Castle motel home. The motel is in Orlando, Florida, close to Disney’s Magic Kingdom theme park, but for many of Magic Castle’s residents it might as well be a million miles from that pricey wonderland. That’s because the Magic Castle, where a room may be had for under $40 a day, is loaded with those near the bottom of the economic ladder — folks with low-paying jobs, hustlers and pensioners who are barely getting by, and transients on their way to who knows where.

Moonee, a smart, playful and happy six-year-old girl, has been living in the Magic Castle for quite a while with her single mom, Halley, an angry and majestically-tattooed 20-something who, clearly and unfortunately, never has been part of the mainstream and won’t be joining it soon. Money comes to Halley in various ways, mostly by scheming, and its flow is erratic and unplentiful. Life’s been a bitch for her, as her white-hot temper shows, but the temper never is directed towards her daughter. Moonee is the apple of Halley’s eye, the wondrous creature who can do no wrong, the one person on Earth she loves unconditionally.

The Florida Project is filmed in colors that blaze with brilliance. I think the director, Sean Baker, chose this somewhat jarring motif to demonstrate the way in which Moonee views her surroundings. To her they are an adventureland meant to be savored and explored. And explore it she does with her pals Scooty and Jancey — the fields close to the motel, the ice cream stand where they twist the arms of customers to buy them cones, abandoned buildings that sit under the Sun peacefully and half-forgotten.

At first, none of this seems like much. But the cumulative effect of the seemingly ordinary soon becomes powerful, as Baker paints the children and their parents with unadulterated strokes. The characters are real, vividly real, and totally believable. I’m still hearing Moonee’s glee-infused voice, which provides one of the soundtracks to the film. It’s been a year since I saw a movie, Moonlight being the last, that rang as true as this one.

Well, as they pile up it becomes apparent halfway through the movie that the details within The Florida Project are not a collection of random observations and occurrences. The plot is headed in a definite direction. And it would be most unfair of me to give away the final destination. I will say, though, that anyone whose heart is not composed of stone better be prepared to have it wrenched. 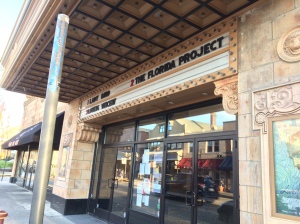 Performance-wise, what can you say about Brooklynn Prince and Bria Vinaite, who portray Moonee and Halley, respectively? Brilliant jobs, young ladies. Utterly brilliant. And Willem Dafoe? He’s the sole actor I was familiar with in the film. His handling of Bobby, the motel manager whose job requires him to put out metaphorical fires right and left, and who keeps a watchful eye out for dangers that might be heading for the children, is understatedly strong.

Sean Baker, who also co-wrote The Florida Project, is yet another I never knew about previously. Maybe I should have been aware of the sitcoms he helped create a few years ago, Greg The Bunny and Warren The Ape. But I wasn’t and am not.

In any event, somebody waved a magic wand over Baker’s head some time ago when he began thinking about the ideas he wanted to get across in The Florida Project and how they might take shape. The magic wand worked.

(Don’t be shy about adding your comments or about sharing this article. I thank you.)