Some days begin badly and then turn out fine and dandy. A week ago Friday, for instance, I spent several hours pouting and moping after realizing that there weren’t any fresh blueberries in the house to dump into my breakfast bowl of Wheaties. I’m certain I’m not alone when I say that Wheaties sans blueberries ain’t no Breakfast Of Champions. I might have continued bemoaning my fate until who knows when were it not for the deserved and perfectly aimed slap upside my head that my wife Sandy administered. “Snap out of it, you fool!” she urged me for the umpteenth time this young year, adding “let’s go to Philadelphia and have some fun.” Right as rain once again, I looked through the arts and entertainment listings in the Philadelphia Inquirer’s weekend section and assembled a plan. Before long we found ourselves on a train heading from the burbs into the big city. Arriving in Philadelphia’s central section around 3 PM, we embarked on our expedition of discovery.

Now, Philadelphia’s a cool place in a lot of ways. For starters, it’s swimming with good restaurants and swell arts establishments and nifty Colonial era streets and gorgeous public parks. You can walk for miles and miles taking in the sights. Or, as Sandy and I did on the Friday in question, you can confine yourself to a small chunk of territory and do just fine. Everything we did took place between two blocks on the east-west axis (11th to 13th Streets), and four blocks on the perpendicular plane (Arch to Sansom Streets). We spent five hours within that rectangle before hopping a train back home.

It was a Friday defined by art, music and food and drink. My kind of day, in other words. First stop was Fabric Workshop And Museum, a non-profit arts institution that has been on the scene since 1977. I’ve been aware of FWM for nearly all of its life, but didn’t get around to scratching it off my to-be-visited list until the other day. Mister Right-On-Top-Of-Things strikes again! 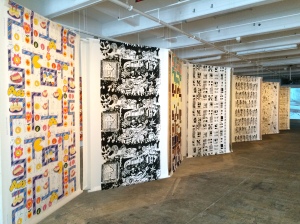 FWM is a busy organization, with various arts-making and educational programs going on behind the scenes (click here to find the official website). Its more public face is the galleries where changing exhibits of, natch, art are displayed throughout the year. The items in the first floor gallery didn’t grab me. But I got big kicks from the handmade textiles that set the huge, warehouse-like eighth floor space aflame with colors. There, mounted side by side in four long rows, were large and beautiful silkscreened fabrics produced over the last few years by teens and young adults in FWM’s Apprentice Training Program. Half of the works stuck strictly to blacks and whites, while the rest went crazy with other members of the palette. Black and white . . . multi-colored . . . I couldn’t decide which family I liked best. Hell, why bother deciding? Both approaches were A-OK.

Bright, jubilant  colors, though, were destined to take precedence over their more dignified siblings as the afternoon segued into evening. From Fabric Workshop And Museum, Sandy and I ducked into a neighboring building and rode the elevator up to Fleischer/Ollman Gallery where we spent 20 minutes getting drenched by rocking blues, reds, yellows, you name it. Man, I started feeling dizzy from the wild vibes at FOG, and I liked that. “Yo,” I almost said to Sandy, “it’s time to add some life to our frigging living room. I’m going to buy that one and that one.” By which I meant Marc Zajack’s loopily loveable oil titled Stoned Bust and Nadine Beauhamois’ Circus Escapee, a plaster/wire/papier mâché beast in eye-popping hues. But I didn’t take out my wallet. I think I should have. And maybe I yet will. 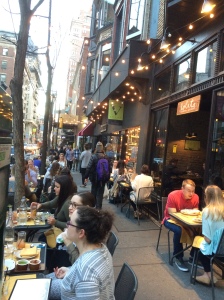 On we marched, our final destination to be Fergie’s Pub, a two story joint where you go when you’re in the mood for bohemian funkiness and friendliness. The air outside was incredibly warm for a February 24, about 72° F, which enhanced Sandy’s and my good spirits. It also resulted in an unusual sight — slews of jacketless diners chowing down at sidewalk tables strung all along a stretch of 13th Street, one of The Little Apple’s restaurant rows. Cool. I mean, warm. 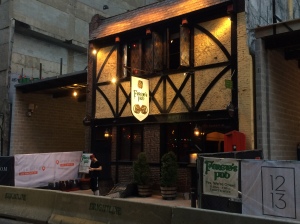 Ah, yes, Fergie’s Pub, a spot that totally agrees with me. Sandy and I had been there four or five times before, but not in the past two years. It’s a good place. The food is straightforward, tasty and fresh. The beers flow like wine, and vice versa. And on some Fridays, starting at 6 PM, a tight and soothingly rocking country-and-folk-flavored band that goes by the unlikely name John Train holds sway (click here if you’d like to be directed to JT’s website). John Train played two sets, each about 45 minutes in length, and had the jam-packed second floor room eating out of the palms of its sweaty hands. The group delivered a bunch of original tunes and some by Bob Dylan, Woody Guthrie, Hank Williams and the like (click here to watch a John Train performance at Fergie’s from earlier this year). The repertoire was powered by drummer Mark Schreiber’s low key but insistent beats and flourishes, and sent soaring by the wistful sounds flowing from Mark Tucker’s steel guitar and guest member Jay Ansill’s fiddle.

John Train is led by lead vocalist Jon Houlon, who sounds like a cross between Jerry Garcia and Arlo Guthrie, and who can banter with and throw goofy barbs at audience members like nobody’s business. The guy is a natural riot. He told a joke that I feel obligated to pass on to my readers. Between songs near the end of the second set, as Sandy and I finished up our turkey burgers, suds and vino, Jon Houlon said this to the audience: “You know The Rolling Stones song Get Off Of My Cloud?  . . . ‘Hey! You! Get off of my cloud’ . . . Well, did you ever hear the Scottish version? . . . ‘Hey! McCloud! Get off of my ewe.'” In my book, that’s a very good one.

You know, I’ve been dancing and prancing in Philadelphia for over four decades, which is most of my adult life, and I’ve yet to get tired of the routine. The day may come when I will, but I’ll worry about it then.

(Don’t be shy about adding your comments or about sharing this article with others. Or about signing up to follow this blog. Thanks.)