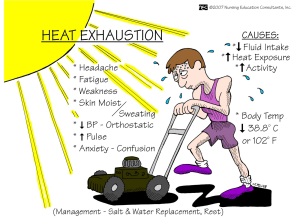 Hooray, it’s summer in my section of Planet Earth! Hooray, day after day has been hotter than hell! Hooray, the humidity has been flaunting its energy-sapping powers majestically! Hooray, early last week I was sweating like a frigging pig and well on my way to heat-stroke territory while mowing the lawn under a ridiculously strong, early-evening sun!

Summer . . .   for the last 25 or more years I have placed it in the This Kind Of Sucks category.

When I was a kid and teen and young adult, though, summer was the best. I loved going to the beach, spreading out on the sands for hours atop a blanket and happily slathering Coppertone suntan oil on nearly every exposed inch of my body in the hopes that my pale white-guy skin would achieve at least a smidgeon of brownish tint. Yeah man, roasting under heat rays generously sent to us from 93,000,000 miles away was the way to go. Sunscreen? Fuggedaboutit. It hadn’t been invented yet and probably would have been laughed off the stage even if it had. Too bad that I, like all guys and girls back then, didn’t have Nostradamus-like abilities to gaze into the future and marvel at the many visits to dermatologists’ offices that awaited us.

Anyway, there I was at 10:00 AM, a few days after mowing the lawn, on a journey to my local supermarket. As I pulled out of my driveway I partly rolled down a couple of windows to let some of the suffocating heat escape. It was already 82° Fahrenheit outside and a hell of a lot hotter than that inside the car. Should I turn on the A/C, I wondered? Nah. The supermarket was only seven minutes away. Only a wuss would need cooled air for a trip of such short duration. Me, I’m not a wuss. I’m a man. More or less.

Seven minutes later, with sweat flowing off me faster than a mountain stream, I arrived at my destination. Good thing I’d had good company along the way. By which I mean I heard a great song on the radio, one that hadn’t crossed my path in ages. Summer Breeze it was, but not the 1972 original by Jim Seals and Dash Crofts, who authored the tune together and had a monster hit with it. The Seals & Crofts recording is a-ok, a gentle and calming invocation of warm summer nights. But the station I was listening to, SiriusXM satellite radio’s Soul Town, played the 1973 cover version by The Isley Brothers.

I’ve always preferred the way The Isleys handle the song to Seals & Crofts’ approach. The complexity of the arrangement, the Chinese-sounding entry into the song, those shimmering, impossibly high voices, the gorgeous electric guitar solo that starts shortly after the four-minute mark and keeps on going to song’s end two minutes later . . . I tell you, in the car I was carried away by Summer Breeze’s grace and power. Here it is:

I completed my rounds inside the supermarket in a semi-flash. On my way home I punched Soul Town’s button once again, usually a good idea. I love that channel. The station came on mid-song. And the song — Hot Fun In The Summertime — was one that nobody in his or her right mind ever will complain about. Sly And The Family Stone put it out in 1969, during their glory days. It’s a champ. Dig the pounding piano that never lets up, those exuberant vocals, the piercing trumpet. Hot Fun’s good vibes guided me back to my house.

Wow, two songs about summer had found me during the handful of minutes I’d been in my car. As a massive believer in the gods of the blogosphere, I had no doubt that a mighty message was directed my way. And that the message was this: “Yo, you who is wearing the incredibly sweat-stained Fred Flintstone tee shirt, listen up! It is your duty to fashion a story out of the first three uplifting summer-themed songs that you hear today. Yes, the songs must invoke summer’s good times, despite the fact that you no longer are a fan of the hot season.”

“And remember,” the message continued, “your story must focus on three songs, not merely two. There is something special about groups of three, such as the three strands of hair remaining on the crown of your head.”

Well, back at the ranch I turned on the stereo system and began flipping from one station to another. I did this on and off for several hours. I knew that a great number, such as The Lovin’ Spoonful’s Summer In The City or Mungo Jerry’s In The Summertime soon would be heading my way. When it didn’t arrive I started to fidget and worry. I had been commanded to compose an opus, but there was only so much time I was willing to devote to the enterprise. Finally though, WRDV, the low-wattage radio station located not far from my home, delivered the goods at 3:15 PM. But my heart sank a little, for through the speakers came one of the summery songs I’ve never been thrilled about: Those Lazy-Hazy-Crazy Days Of Summer, in this instance sung by the great Nat King Cole. Corny lyrics abound. I suppose that in some sense they seem charming, especially if you’ve tied one on and feel compelled to sing along with all your might. The blogging gods obviously are taken with the song, or otherwise they’d not have placed me in position to hear it. Who am I to argue? Okay then, here we go — a one, a two and a three — “Roll out those lazy, hazy crazy days of summer . . . ”

60 thoughts on “Three Songs Of Summer”