On April 9 of this our present year, I went out in search of signs of spring, which was damn well taking its time in arriving. Though I didn’t come up empty-handed, the cupboard indeed was awfully bare. Naturally, having donned the hat of writer a few years ago, I wrote about the expedition, publishing the story six days later.

In the interim, however, nature began bubbling halfway decently in my region. To wit, two or three days after the 9th I began to spot some flowering trees in bloom. Finally! Spring was coming out from behind the curtains. 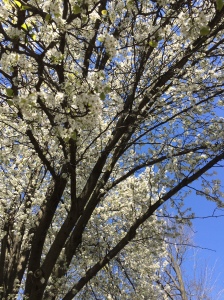 Now, I had no particular plans to place a second springtime-related opus into the ethers of cyberspace in 2018. Believe me, more than enough of those bad boys are already up there. But it turns out that I couldn’t resist. Last week’s Monday clinched the decision for me. Conditions-wise the day was ideal. The skies were so blue, my knees went weak looking at them. The temperature was 68°F (20°C), one of my favorite numbers on the dial because it meant that if a stroll around town would cause me to break a sweat, the sweat would flow only minimally. Ergo, a stroll was in order. But where to? I hadn’t been in the Chestnut Hill section of Philadelphia for a while. It’s a large, beautiful area, countrified and quaint and pretty hip. A village unto itself in effect, Chestnut Hill is almost always a good place to pass your time in.

At about 2:00 PM I jumped into my trusty 2001 Honda Civic. Eight miles later I was in Chestnut Hill. I was psyched for the impending walk. And I knew what my focus would be, photographically anyway. While enjoying the pleasures of the day I, for no brilliant reason, would take pictures mostly of flowering trees.

I spent an hour and a half in Chestnut Hill, walking along all nice and relaxed. Everything was quite peaceful. I heard but one barking dog, unlike in my suburban nook where barks are as common as dandelions. And though lots of cars were on the roads, not a one of their drivers honked within my range of hearing during my excursion. I don’t know, maybe Chestnut Hill is a magnet for good quality canines and humans.

Getting back to spring, it didn’t take long for me to conclude that it had a long way to go. I mean, 90% of the non-flowering deciduous trees (maples, oaks, whatever) had no leaves on them whatsoever, though the budding process was under way. 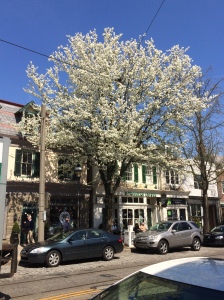 But the flowering trees were another story. Though there weren’t as many of them as I’d have liked to see (and I assume that all members of the flowering varieties were in fact blooming), there were enough. And I took a good look at every one I passed. Who can resist gentle creations aglow in creamy whites, pretty pinks and other reddish shades? Not me.

One block in particular was a wonderland of sorts. I speak of W. Southampton Avenue. I was heading downhill on Germantown Avenue, the steeply sloped main drag filled with clothing boutiques and restaurants and other shops, when a marvelous mass of white blossoms caught my eye. They were attached to a series of cherry trees that occupy a good bit of W. Southampton, a residential block. I crossed Germantown Avenue and dove into the milky white scene. From Germantown Avenue I hadn’t noticed it, what with my strong case of myopia, but a petal storm was going on. Dropping from the trees in big numbers, petals were floating through the air rhapsodically. Man, it was beautiful. I was all set to lay myself down on the sidewalk and go blissful. But then I remembered that I’m not so good at going blissful. Shit, I knew I should have enrolled in a Zen Buddhism program years ago! You live and you learn. Sometimes.

Well, I snapped some pictures of W. Southampton, hoping like crazy that I’d capture some mid-air petals. If you look closely at the photos that I’ve included you’ll see a few. They and their siblings were a sight.

Ah, the mystery of petals. Towards the end of my walk I found myself ambling along a stretch of sidewalk covered with pink ones. They had fallen from a saucer magnolia tree, which nevertheless was still grandly laden with flowers. The next day, at home, I gave a bit of thought to those and the other petals that I’d encountered in Chestnut Hill. So many already were off their trees, even though the trees had been in blossom for less, probably, than two weeks. Seems a shame that the great flowering-tree show comes and goes as quickly as it does. If its design had been left up to me, I’d have commanded that it last for two months or more. A magnificent extravaganza, it’s worthy of that, without question. 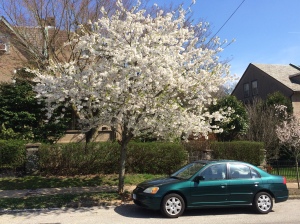 Not long after stepping through the carpet of magnolia petals, I found myself back on the block where I’d parked my old Civic. I liked the way my car looked, demure and cute despite the large blotches on its trunk and roof, as it waited patiently for me in front of a small, adorable cherry tree. The tree’s bone-white blossoms contrasted righteously with the Honda’s deep green paint. A photograph of the scene cried out to be taken. A few minutes later I got into the Honda and made my way back to the burbs. A flowery excursion had come to its end.

P.S. I’m indebted to Karen Flick, landscape manager at Philadelphia’s Awbury Arboretum. I’m a nincompoop when it comes to flora. I sent some of my photos to her, and she identified the trees for me.

(Don’t be shy about adding your comments or about sharing this article. Sharing buttons are below.)

76 thoughts on “Flowering Trees Were Calling Me: A Stroll Through Chestnut Hill”