One thing for certain about this little old world of ours is that it holds an overwhelming amount of content geared for human discovery and consumption. Travel destinations, food stuffs, movies, automobiles, political causes, you name it . . . there’s always something for us to get excited about and sink our teeth into, if we are so inclined. Which, no doubt, nearly every one of us is. Myself included.

This story, then, shall be a look at a few things that have rung my bell quite nicely as of late. In the upcoming paragraphs I’ll expend wordage upon this motley group: a television series (Ozark), cheddar cheese, and the song (Texas Sun) that has captivated me more than any other recording so far during pandemic-plagued 2020. And I’ll be glad to hear about what has been tickling your fancies recently. So, please don’t be shy about letting me know. 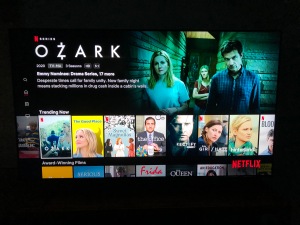 Let’s start with Ozark, the Netflix series whose third season was unleashed earlier this year. My wife and I watched all three seasons over the past few months, taking a two or three week breather between each arc. (The fourth and final season is on the drawing board, but who knows when filming will be able to begin.) We became hooked almost from the get-go, as have millions around the globe. Not so one of my cousins though. When I mentioned Ozark to her during a phone conversation not long ago, she said she’d seen a few minutes of the show but that’s about all. “I don’t want to watch all those sleazy people” was more or less how she summed up her feelings about Ozark.

Sleazy? Indeed! That word damn well fully applies to many of the show’s characters. It barely indicates, though, the depths of their polluted natures.

In Ozark we learn the tale of a married couple, Marty and Wendy Byrde (played, respectively, by Jason Bateman and Laura Linney) that is ordered by a Mexican drug cartel to abandon their home in Chicago and relocate, with their two kids, to central Missouri’s Lake Of The Ozarks. LOTO, an enormous man-made lake and a popular vacation spot, is surrounded by rural territory populated with all sorts of unsavory individuals.

Why did the cartel so demand? Because Marty, a buttoned-down financial wizard who years before had agreed, foolishly, to become one of the cartel’s primary money launderers, through no fault of his own got on the cartel’s very wrong side. Via astonishingly quick thinking and quick talking, he avoided execution by convincing the cartel’s top brass that he could make and launder enormous monies for them in, of all places, the Lake Of The Ozarks. Turns out he was pretty right as rain, though establishing the mechanisms that enable that to happen send Marty and his family down hellish paths that in a million years they otherwise wouldn’t have imagined could emerge. And their ordeals gradually bring out the worst in Marty, and the scarily worst in Wendy.

I can see the show’s writers rubbing their hands gleefully as they came up with plot lines that continuously elevate the dangers and other mega-problems that Marty and Wendy must confront. What a series! Prominent cast members regularly meet their demise. Dirty-dealing and treachery reign supreme. Ozark isn’t for everybody, as my cousin demonstrates, but, if you’re not already a fan, it just might be for you.

Now on to cheese. I’ve been a cheese lover for many moons, and cheddar is one of my favorite types. But not the mild kind. I like cheddar that is bold, aggressive and memorable. Those are qualities, by the way, that yours truly sorely lacks. 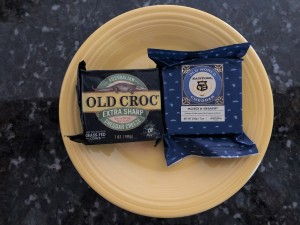 But it never has been easy for picky me to find cheddars that I deem outstanding. Vermont, for instance, is famed for its cheddars, but I’ve yet to taste a Vermont cheddar that truly knocks my socks off. Thankfully, about four years ago I stumbled upon Old Croc cheddar, which is produced in Australia. The brand’s extra sharp version pleases me deeply. As does a very recent discovery of mine: Sartori’s aged and sharp cheddar. Heavy with elevated flavor, and salty, it is the first American-made cheddar to receive my seal of approval. Take a bow, state of Wisconsin! Pieces of Old Croc and/or Sartori have been my go-to lunch of late. They’re delicious as is, and even better when atop Triscuit crackers.

I wouldn’t dare eat those cheddars while listening to Texas Sun, however. That’s because the process of munching away would interfere with my ability to absorb this oh-so-fine song, which was released in February. A collaboration between vocalist Leon Bridges, who often makes soul music in the vein of Sam Cooke, and indie rock band Khruangbin, Texas Sun is a meditation on longing and lust. It is gently powered by a sweet and steady beat, and wafts upon the wings of dreamy guitar lines. I’ve heard this song many times on various radio stations, which indicates to me that it has found its way into the hearts of numerous music lovers and radio programmers. The best thing for me now to do is to get out of the way and allow you to listen. Here is Texas Sun: