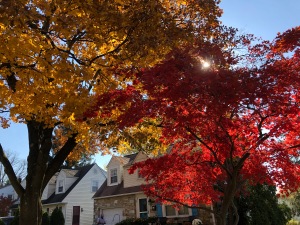 I wasn’t expecting to write about autumn for a second time this year, seeing that I pretty well summed up my feelings about this, my favorite season, in an essay that hit cyberspace only last month (click here to read it). But I couldn’t resist. How could I, when colors on many of my neighborhood’s trees finally came alive on the 9th of November? How did that even happen? It was kind of a miracle really, because the leaves had been nowhere near as vivid even the day before. And, soon after the 9th, the colors diminished greatly in effect and stature, as our woody friends were having a contest to see which ones could de-leaf themselves the fastest. Yes, I was in the right place at the right time when I took an early afternoon walk through my community on the peak day.

There’s no doubt, however, that I’d have much preferred to wander among gorgeous trees in a forest, or in a substantial wood. You can truly commune with nature in those landscapes, unlike in most of my suburban Philadelphia region, where nature has been paved-over  and tamed significantly. But forests and woods are anything but around the corner from my house. A car not being at my disposal on the 9th, a visit to anywhere not within walking distance was off the table.

I wasn’t complaining, though, because my neighborhood looked so damn good. Golds, ambers, coppers, russets and burgundies abounded, and I was pleased as punch to roam for 45 minutes, soaking up their beauty, basking in their glory, etc. In other words, I dug the shit out of the color explosions! What’s more, the temperature was perfect (72°F, 22°C) and the skies were as soothing a shade of blue as you could hope for. Days such as that one don’t come around often enough, and are rarities in my part of the globe in normally pretty-chilly November.

I almost always listen to music during the walks that, for exercise, I take each week in one locale or another. But not this time. That gave me the opportunity to do a bit more thinking than usually happens during my treks. And what popped into my head and stayed there for a while? Why, thoughts about Joe Biden, a good guy, and Donald Trump, a f*cking jerk. That’s what! 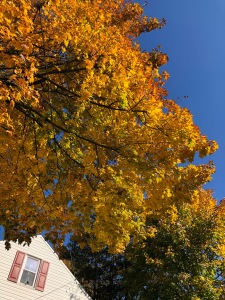 Yup, I don’t like Trump even a teensy weensy bit, he who shamelessly has been trying to steal a decided presidential election. What is there to like about someone who is a force for chaos and darkness; who sneers at democracy’s principles and structure; who emboldens white supremacists; who can’t go more than thirty seconds without lying; who is callous, vindictive, narcissistic, uncivil, unhinged and a bully? Nothing, in my opinion. Yet, roughly 74,000,000 American voters gave him the OK in the recent election. That’s a highly unsettling and sobering truth for anyone who believes in equality and progress, and is concerned about American democracy’s stability and strength. Fortuitously, for the USA and for the rest of the world, about 80,000,000 voters, and a majority of electoral college votes, went for Biden. As a result, better days, saner days, lie ahead. And, by the way, those who agree with my assessment of Trump owe a huge debt of gratitude to Biden for entering the race last year, because I’m certain that no other Democratic Party candidate for president would have beaten The Despicable One.

As I inch closer and closer to this story’s exit door, I feel compelled to conclude the proceedings with hot, steamy recordings by three guys named Joe, all of whom, sadly, are no longer with us. I’m doing this in honor of Joe Biden, who is strongly with us and poised to undo much of the damage that Trump has inflicted at home and abroad during the last four years. Yo, Joe! — you and Kamala could do a whole lot worse than to boogie down to these tunes at your inaugural balls on Inauguration Day (January 20). They’ll fill both of you with loads of energy and get the two of you even more psyched than you already are to do your new jobs.

As for Donald Trump, these songs are appropriate for him too. They would make a fine soundtrack for him to angrily shake his oversized booty to as he leaves the White House, on the just-mentioned January date, for the final time ever.