We went, we saw, we had a very swell time overall, and then we came home. The end.

There’s something to be said for conciseness, don’t you agree? And maybe if I were more courageous than I am I’d write not another word beyond the 18 contained in the two masterful sentences above. But my fingers, God help them, are itching to type, so I’ll bag that idea for now. In fact, I’m going to try and bite off more than I normally can handle, by turning my wife Sandy’s and my recent visit to Paris and Amsterdam into a three-part blogging extravaganza. I’ve noted before on these pages that I have trouble enough producing one-parters. Wish me luck.

Let’s begin. In many ways I’m a lucky individual. And I don’t take my good fortune for granted. Throughout my adult life, for instance, I’ve done a fair amount of traveling. In the earlier of those years I somehow wandered far and wide with not much more than a few bucks in my pockets. During the last three decades they have been more fully filled with cash (and plastic). Regardless of my financial situation, though, I’ve never ceased to be amazed that I’m able to leave the home environment and rev my motor in other parts of the world. And for my money you can’t do a whole lot better than to frolic in Paris and Amsterdam. Great cities both. Beautiful cities both. And Sandy’s and my week-and-a-half-long sojourn there earlier this month came with a special bonus. Namely, we spent most of the expedition with our très magnifique pals Alan and Martine.

Martine and Alan live in Paris. Have a lovely home in the city’s heart. And they not only put up with us, they put us up. I guess they like us because, after four days of that, they hopped aboard an Amsterdam-bound train with Sandy and me. The four of us spent several days bopping around that canal-laced city until the scheduled time arrived for the Parisians to return home. Alan! Martine! Don’t abandon us! We’ll be lost without you! But Sandy and I showed ’em. Yeah, maybe we stumbled and fumbled a bit, but we sure as shootin’ had three more Amsterdam days heavily sprinkled with fun. Amsterdam, I miss you. A lot.

Now, Sandy and I had been to Paris before. We’d seen most of the must-sees and plenty of the less-noticed sights too, such as the building in which Vincent van Gogh crashed with his brother Theo for two years in the 1880s. This time around we decided to let things flow organically, whatever that means. And to try and spend lots of time just strolling around, taking in the views and vibes in as unpressured a manner as we could. Sure, we couldn’t resist going to a couple of museums (The Orangerie, The Marmottan Monet), and we had a sweet dinner in a quintessentially Parisian eatery (Le Petit Colbert), the type that natives frequent. But walking is what we did the most of. Miles and miles of it. All over central Paris, on both sides of the Seine. And beyond. The entire time, indoors and out, Martine and Alan accompanied us. They are expert tour guides and really, really good sports.

What can I say about Paris that hasn’t already been said? Nothing much, pardner. But that won’t stop me. I mean, I’ve got blog stories to create. First, if you haven’t been and have the means, you should go. As everyone knows, Paris’ appeal isn’t simply its gorgeousness . . .  the city is intriguing too. Streets come together at odd angles, a wonderful idea. Many sidewalks are narrow, an example of quaintness of which I approve. And seemingly every block has alluring buildings you’d like to live in, bistros whose tables are just made for sipping espressos beside, and perfect, little shops loaded with foods better than you’re likely to find at home. The pastries, the breads, the cheeses. Did somebody say breads? I live in suburban Philadelphia, and I know of only one place within five miles of my house where I can buy a crusty, flavorful rustic loaf of bread. Yo, when’s the next flight back? I need to be around people who know how to bake the staff of life.

And there’s a soul-satisfying uniformity in scale and color to much of Paris that I’d forgotten about. Most of Gay Paree’s buildings are from the 1700s and 1800s and about seven levels high and made from beige-colored limestone. Talk about a charming and serenity-inducing look. I couldn’t get enough of it. I wallowed in its aura.

It would be a mistake for me to end my brief Parisian recap without mentioning the big guns for which the city is famed. For starters: The Eiffel Tower, Notre Dame Cathedral, the Seine, the unreally-huge Louvre Museum. To first-time visitors I’d say you’d do well to examine them thoroughly, though, to be honest, you easily could live without stepping foot within the Louvre.

A snap of the fingers later, Sandy and I and our friends found ourselves in Amsterdam. I’d been there about 30 years ago, though my pigeon-like brain has forgotten many details of the experience. Sandy never had been. I’ve got to tell you, this is a place where I’d be happy and content as a clam to live. And the fact that there wouldn’t be a language problem is a plus, as Amsterdammers speak English in addition to their native tongue. I kept looking around and exclaiming to myself and to whomever else in the party was nearby: “I love this city.” 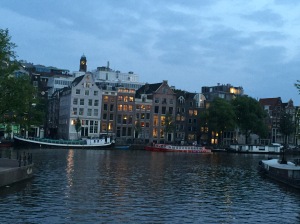 What’s not to love? Amsterdam looks great. Most of the houses, many of which overlook canals, are cozy and cute and entertainingly gabled. Generally they stand five levels above ground and are constructed of bricks. And they are not new, the majority having been erected between 1500 and 1900. I like being in places that look pretty much the same as they did hundred of years ago. And the canals? Man, they crisscross the city gently yet semi-riotously. And their prettiness can not be exaggerated. As in Paris, the four of us walked and walked and walked. Very happily. And when we got tired of walking we climbed aboard Amsterdam’s trams, which make navigating the city a breeze. 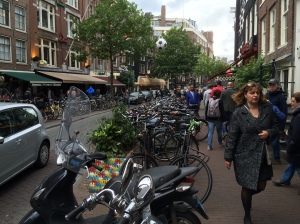 Amsterdam is relatively compact, meaning that you can make it to pretty much anywhere on foot, though some treks might take you an hour and a half. There aren’t a ton of cars on the streets, and that’s because Amsterdammers are bicycle-crazed. Practically everyone owns a bike and uses it to get around. I’d heard about the bicycle scenario, and it was a gas witnessing it. Bicycles, bicycles everywhere, loads in operation, many more attached to bike racks, bridge railings, trees, you name it. You gotta watch out where you’re going or you might get smacked by a bike. One evening, Martine received a double dose of near-trouble. It’s easy to become distracted by the loveliness surrounding you in Amsterdam, and that’s what happened to her. Stepping off the sidewalk into the narrow street bordering a canal, she nearly got clipped by a car. Half a minute later, at the same spot, a bicyclist almost broadsided her. But I’m giving the wrong impression. Back to Amsterdam’s magnetic powers.

The Fearsome Foursome hit some of the famed sites together (Anne Frank House, Van Gogh Museum, Rijksmuseum) and took a groovy canal boat tour of the city. And after Alan and Martine hightailed it back to Paris, Sandy and I poked around neighborhoods and other spots, such as the city’s botanical gardens and zoo and the Stedelijk Museum, an astonishingly good modern art repository. Then, before we knew it, the time approached for us to head to the airport and return home. But I can’t wind things up without mentioning two subjects: marijuana and prostitutes. Amsterdam is famed for both, as cannabis use and prostitution are legal, within boundaries, in this enlightened and welcoming city. And they undoubtedly help make for an atmosphere real attractive to millennials (residents and visitors alike), who fill Amsterdam’s streets in uncountable numbers.

Now, seeing the prostitutes was kind of cool. They have set up shop on a smallish enclave of blocks in what’s known as the Red Light District, which my group toured on a Sunday afternoon. Barely dressed, the ladies stood in full view behind ground level doors and windows in what I assume used to be normal residences. My eyes, and those of my companions, were popping. Needless to say, I didn’t come close to indulging.

But marijuana was another story. Me, I haven’t had a toke in about 30 years. And boy was I tempted to resume the habit temporarily. After dinner on the day we arrived, Alan and I strode into one of the town’s numerous marijuana parlors, all of which, for reasons I don’t know, are called, incongruously, coffee shops. Alan strictly was an observer. The place looked like a Greenwich Village beatnik hangout. Lights were low, tables were small and occupied, and the air was filled with second-hand marijuana smoke. Inhaling deeply, I started to feel a bit of a buzz. I walked to the counter and sized up what’s what. Gazing at a menu, I saw that various strains of grass were available. The least potent varieties were described as strong. The most powerful were guaranteed to get you incredibly high. Prices for one ounce ranged, I think, from 10 to 15 euros. Not too expensive at all. One of the two girls behind the counter suggested to me that getting stoned after years of abstinence would be a terrific idea. I looked at Alan and pondered the situation. I breathed in the second-hand smoke hungrily. My buzz got slightly stronger. In the end, though, nerd that I am, I chickened out.

To be continued, if the stars align themselves properly.

(Don’t be shy about adding your comments, or about sharing this article with others)

(Most photos by Sandra Cherrey Scheinin. The crooked ones are by a nerd whom she knows. If you click on any photo, a larger image will open)