If it had been up to me, the Honda Civic that my wife Sandy and I bought fresh from the factory in 2001 would still be parked in front of our house, ready for action. I’ve always liked that car. Even though its body paint eventually mimicked the appearance of my age-mottled skin, and the fabric on the underside of its roof has drooped like a cow’s udder for years, I didn’t care. Sure, a paint job and a fabric repair would have been just what the doctor ordered, but I’ve got a knack for putting things off. Ergo, I happily continued to drive the Honda in its unattractive condition, allowing it to take me around my immediate area. In its old age, no way was I going to test the car’s capabilities on a long-distance drive. For modest daily transportation needs, however, the Civic has performed its job damn well. 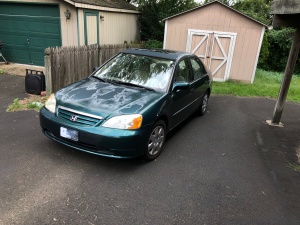 On the other hand, Sandy has disliked the Honda, which I fully admit is an eyesore, ever since its appearance went south. She wouldn’t be seen as a passenger in said eyesore. Nor, as follows, would she drive it. She therefore stuck exclusively with our other car, a much, much newer model that I also motor around in a lot. And, needless to say, she also wasn’t thrilled that the Honda was on full display, for everyone to see, in the neighborhood. Who could blame her?

That’s why I promised last year that I’d help to make the Honda disappear by replacing it with a modern vehicle, one that looks good and is equipped with far more safety features than the Honda possesses. One situation or another kept getting in the way of that happening. But finally a miracle occurred a few weeks ago. Hallelujah, a new Toyota has become part of the family!

So, now we possess two recent-vintage vehicles. Sandy and I share them. And the Honda has been relegated to the bottom of the driveway, behind our house, where it awaits its fate. In a matter of days it will be towed away, a donation to a worthy charitable organization. I suppose they’ll get a few hundred bucks for it. I’ll be sorry to see it go.

But why will I be sorry? It’s a good question, one I probably wouldn’t have thought about had I not decided to bless cyberspace with a Honda tale. Luckily, a few insights have popped into my head.

I’ve never been too much of a materialistic sort of guy. Partly that’s because I had only a small amount of funds during the first 12 or so years of my adult life. And even though I’ve done all right financially since then, I haven’t felt the need to make up for lost time, acquisition-wise. Fact is, most of my possessions mean little to me anyway. Except for my vinyl album collection. Vinyl is f*cking cool, after all. And for a few pieces of artwork that tug at my emotional core. And for the Honda Civic, which, it’s only now dawned on me, reminds me of some qualities that I like and admire in people.

The Civic, which I’m going to refer to in the past tense here, was easy to be with, unpretentious, and made its way through life in good spirits despite my neglect of the face that it presented to the world. It also was reliable, having had very few mechanical issues in its lifetime, and, by virtue of its reliability, demonstrated excellent loyalty towards me.

Is it any wonder then that I felt totally at home when I slipped behind the Honda’s steering wheel? Being inside that car was like spending time with a good friend. I was on the same wavelength as the Honda. I understood it. Our personalities melded admirably. We were a compatible pair that had grown old together very comfortably.

I enjoy but have yet to develop anything resembling a love affair with either of the vehicles that Sandy and I now drive. And I’m nearly positive that I never will, which is okay. As long as they get me from here to there and back, that’s all that really matters. But they are too high-tech for me to fall heavily for them, too full of buttons and knobs and adjustment options and display screens. All of that places them far from the warm and cuddly section of my spectrum that the Civic occupied. These two newer cars don’t remind me of the sorts of people that I want to be around.

I don’t know, maybe I’ll go out for a final spin in the Honda before it’s towed away. Haven’t decided yet. Whether I do or don’t, the deep green Honda Civic, once as handsome as hell, soon will be gone from my life forever. Shit, I’m going to miss that old boy.

(Please don’t be shy about adding your comments or about sharing this story. Thanks.)