Actually, the title to this essay is incomplete, because the best thing of all from January was the departure from the presidency of lying-through-his-teeth, seditious Donald Trump. Faithful readers of this publication are aware that I despise Trump. He’s a poisoner of minds. I’m far, far from alone in being able to breathe normally now that he’s not in the White House. 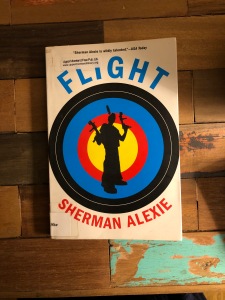 But that’s enough about Trump. Let’s move on to a book I read in January that I think is awfully close to being great. It’s a slim volume too, a proper length for a reader whose attention span these days often is measured in nanoseconds. Namely, me. Flight is the novel’s name and Sherman Alexie is its creator. It follows the doings of a teen who calls himself Zits, a painful nod to the pimples that cover his face unmercifully. Zits has been dealt a pitiful hand. His American Indian father abandoned the family when he was born. And his mother, a white woman, died when Zits, an only child, was six. His life since then has been a revolving door of foster homes and youth facilities. Opening in the early 2000s in Seattle, Washington, and narrated by Zits, Flight drew me in from the get-go.

Zits is smart and funny, but exceedingly anti-social too. Basically, he’s lost. Love doesn’t factor into his life. He has no friends. A career path isn’t in sight. And he feels the pull of, but is disconnected from, his indigenous roots. He knows all of this, and possibly is open to his plight taking upward directions. However, how might such ever occur?

One day, strange business begins happening to Zits. From out of the blue he becomes a time traveler, tossed by forces unknown and unseen into the bodies of others whose circumstances make Zits examine his American Indian heritage and the ways in which American Indians have interacted with, and been treated by, the USA’s white population. On one of his journeys into the past, for instance, Zits uneasily faces complicated moral issues at the Battle Of The Little Big Horn, a gruesome confrontation, in 1876, between Native Americans and the U.S. military.

Loneliness and anger have defined Zits for many of his days. But his surreal experiences, affecting him deeply, widen his perspectives and loosen his emotions. Those experiences affected me deeply too. As did the book’s entirety. Flight felt authentic to me, including the time-travelling episodes. The dialog sparkles throughout Flight, and Zits’ thoughts and observations are sharp and alive, not wobbling for even a moment. Alexie can write. Alexie, by the way, grew up on an Indian reservation in the state of Washington. He left the reservation years ago, and has become a well-known author. The position of  American Indians in society is an ongoing theme in his works.

Is there a way to segue gracefully from Sherman Alexie to a sunset? Shit, I ain’t even going to try. Sunsets . . . man, I hardly can believe how often I’ve written about them on these pages. And I think it will be a while before I’m sunset-ed out.

My previous opus contains a few words about a magnificent sunset that I caught in December 2020. I viewed it while walking around my neighborhood. During that walk I realized that the finest spot to gaze at the setting Sun in my hood is from a corner half a block from my house. That corner provides as open a view of the western horizon as you can get in my town (I live near Philadelphia). It had taken me a mere 15 and three-quarters years of home ownership to make that discovery! 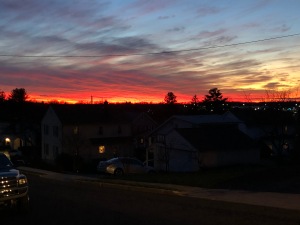 Anyway, since the eureka moment arrived I’ve moseyed to that corner a number of times to watch the Sun do its thing. And on the second of January I hit the jackpot. Most sunsets in my locale are good but not great. But as the skies darkened on the date in question, what had been a pleasant sunset transformed miraculously. Fiery oranges exploded beneath blues and greys that were not to be played with. Pale yellow shards seethed. I knew without a doubt that I was in the right place at the right time.

From sunsets to slippers? Sure, why not? For the past five or so years I was the owner of a navy blue pair of slippers that did their job just fine. Until 2019, that is, when they decided that they enjoyed sliding off my feet when I strode up and down stairs. I began to dislike them at that point, and got really sick of the f*ckers when the sole of the right-foot slipper opted to decompose, in no time developing a hole big enough to stick a corn cob through. But, lazy as I am, I hung on to the siblings rather than purchase replacements. 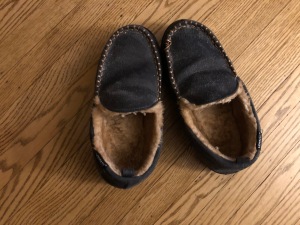 Finally, though, enough became enough. Last month I scouted out slippers on the internet, and bought a pair that appeared to meet my modest requirements. When they arrived at my front door I deposited the crappy ones in the trash. I adore my new slippers so far. They are comfortable, fit nice and snugly, and look damn good too. Yeah, I’m in slippers heaven. Out with the old and in with the new! Hey, that’s not always a top-notch idea, but this time it was.

(Please don’t be shy about adding your comments. Mucho gracias.)