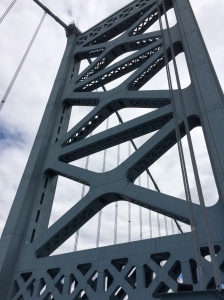 When you’re comparing physical challenges, walking across the Benjamin Franklin Bridge, in both directions, ain’t exactly on a par with scaling Mount Everest. Or bungee jumping off the rim of the Grand Canyon. Or even playing a round of golf, for crying out loud, assuming you’re walking (instead of riding) the course and hauling around your bag of clubs on your very own shoulders. But in my little world, tackling the BFB is challenging enough. Well, maybe it’s not all that challenging. But it’s certainly different. And I knocked it off my do-it-already list last week. That list now has only 897 items on it. If I am reincarnated enough times I’ll get to most of them. Unless, that is, I come back over and over again as a sloth. Which, if it happens, wouldn’t surprise me.

Walking the bridge was an idea that appealed to me the moment I heard about it, which was a few months ago on a late-night local television show. “Yeah,” I thought to myself, “that’s right up my alley. I’ll get some fresh air. I’ll see some sights from a new perspective. And it’s something, I suppose, that not all that many people do. I’m ready to go!” But I ended up waiting till winter said goodbye and pleasing temperatures arrived. When the 3rd of May rolled around, with its expected high of 65°F, I hopped aboard a train that took me from my suburban town into downtown Philadelphia. I arrived in the city in the early afternoon. 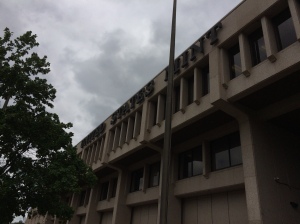 The Ben Franklin Bridge, a massive and profoundly complex structure, as suspension bridges by nature are, opened for business in 1926. It spans the Delaware River,  in effect eliminating that watery divide between Pennsylvania and New Jersey. The bridge’s bases are in Philadelphia and Camden, cities occupying territory in Pennsylvania and New Jersey, respectively. To reach the bridge’s pedestrian walkway (the bridge has walkways along its northern and southern lengths, but only the southern one currently is open), I passed Christ Church Burial Ground, at the corner of 5th and Arch Streets, where none other than Mr. Franklin himself is laid to rest. And then, 100 feet later, I strolled past the hulking United States Mint. Philadelphia is full of unexpected, wacky juxtapositions like that, which is one reason I like the city so much.

Half a block north of the mint I began my bridge adventure, for it is there that elevated lanes, for humans with motorized vehicles and for those without, start their ascent. Those lanes are segregated, though the walk sure would be highly intriguing, not to mention truly challenging, if they weren’t. I might run that notion past Philadelphia’s and Camden’s mayors. I’d never noticed the walkway before, despite having been in its vicinity half a million times over the years. It is there plain as day.

First thing I realized was that I should have worn more than a light shirt beneath my light jacket, because the winds were blowing pretty damn good, chilling my semi-ancient bones to a degree I wasn’t thrilled with. The second thing I realized was that within a matter of seconds I was 15 or more feet above ground. I looked to my right and watched a construction crew clearing the ground for what will eventually hold a fancy condo or rental complex. Who’d want to live beside a bridge’s entrance ramps is beyond me, but lots of things are beyond me. 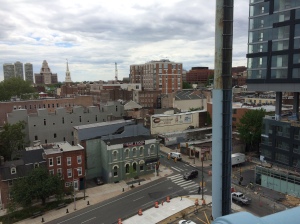 At this point I had the equivalent of eight or so blocks-worth of walkway to navigate before reaching the Delaware River’s western shoreline. The views were wonderful. I looked down upon 3rd Street, 2nd Street, Front Street and others, all of which I’m very familiar with and which were part of Philadelphia’s heart in its colonial days. Those are beautiful and quaint arteries, as many colonial era buildings remain there. But from high up I wasn’t paying attention to any specific structures. What grabbed me were the wild patterns, the crazy quilt formed by building sides and rooftops and signage in this non-high-rise section of the city.

By the time I reached the water’s edge I was 140 or thereabouts feet above both ground and water. The Delaware is about half a mile wide here. I watched a ship heading south on the river and, if I had been wearing one, would have held onto my hat as the winds did their thing. And I looked out at Camden, a depressed city that is trying to bounce back. It’ll be years, maybe never, before Camden is invited to any C-list, let alone A-list, parties.

On I trod, crossing the river and entering the area above Camden’s lands. Despite the winds I was enjoying the trek. Patches of blue played peekaboo with the clouds and it felt good to give my legs a very good stretch. 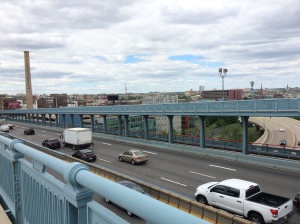 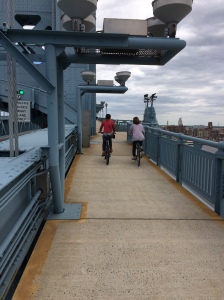 I stopped to admire the sights many times during the journey, to smell the roses as those wiser than me say, but between those moments of quasi-bliss I maintained a pretty brisk walking pace. Cars and trucks by the shitloads whizzed by in their delegated lanes 20 feet below the pedestrian walkway, but not a lot of humans shared space with me on the avenue I’d chosen. During the hour and a half that I spent on the bridge I encountered no more than 30 people. Like me, most of them were lone wolves out for a stroll or perhaps on their way to work or to home. A few cyclists passed me, as did half a dozen joggers. And I saw two couples enjoying the day with their leashed dogs. For the most part, though, I had the bridge to myself. It was a fine place in which to space out a bit, to tune into good frequencies, to haul out that sense of adventure that I don’t want lying dormant for extended periods of time.

On the eastward leg of the journey I stopped just a bit short of the stairway that brings one down to Camden’s soils and asphalt. There I turned around and started back to where I had entered the walkway in Philadelphia, a mile and a half away. Much to my amazement, a bicyclist surprised me on the middle of the bridge. He was a scraggly-haired, middle-aged guy. He slowed down beside me. “Can you help me out?” he asked. “I need some money to get the train to Doylestown.” Doylestown? Was he really planning to board a train, with his bike, going to Doylestown, which is 30 miles from where we were? It hardly mattered. I figured it wasn’t a great idea to piss off someone on the middle of a bridge, what with nobody else within eyesight or earshot. I reached into my back pocket and pulled out my coins. “Here’s all the change I have,” I said. “It’ll help you a little.” He thanked me and went on his way.

Can’t say I’ve been hit up before by a panhandler on a bridge. Then again, I haven’t walked upon many bridges in my life. Maybe panhandlers are common sights on spans with heavy pedestrian traffic, such as the Brooklyn Bridge. Anyway, before too long I reached the BFB’s western terminus. I’d had a fine time. On to the train station I headed to catch a ride back home.

48 thoughts on “Across The Bridge And Back”