Where the f*ck have I been that I wasn’t aware that a summer cold is a thing, a topic of active discussion, and probably has been a member of the thing category for a good long while? Had I ever heard the term before? Possibly. But if I had it didn’t stick like glue to my brain cells. Anyway, a week or so ago two people mentioned the words when they learned of my ailment. In sympathy, one of them said that “summer colds are the worst.” The other said that he knew of someone else who was suffering from the symptoms of this dastardly condition.

Summer colds. Are they different from colds that you might pick up at any other time of the year? Beats me. In any event, I was down and partly out for the count during the first week of August. The cold was heavy. It was a summer cold, you dig?

I went through Kleenex tissues as if they were salted peanuts, so full of amazingly robust mucus was my respiratory system. I moaned and groaned like a wuss. I had less energy than a used flashlight battery. But eventually my body pulled itself together and I began to feel pretty damn good. 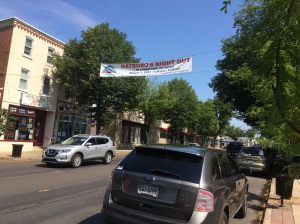 Yeah, pretty damn good indeed. And so, on August 8 I decided that I needed to stretch my legs in a meaningful way in environs that might inspire and intrigue me. Looking forward to a mini-adventure, off I headed to Hatboro, Pennsylvania, a town that looks like a town (Hatboro has two long strings of stores and businesses along a main street, which is crisscrossed by tidy residential blocks). In other words, it’s not a hodgepodge collection of housing developments and strip malls. I’ve been to Hatboro many times, what with it being only three miles from my home, but never had gone on more than a 15-minute ramble there. At 10:30 AM I parked my car on Hatboro’s shopping drag (York Road), fed the parking meter and set off.

York Road’s shopping section is lengthy, extending for half a mile. The stores are mostly of the mom and pop variety. I’ve often wondered how most of them stay in business, as I’ve never seen Hatboro’s sidewalks even remotely crowded. But stay in business they somehow do. You have a hardware store, several barber shops, bakeries, delis, diners, a big furniture store . . . and I’ll end the list now to avoid this becoming a 2,000-word essay. None of the shops are glitzy. Glitziness has little place in Hatboro, a blue collar area and proud of it. 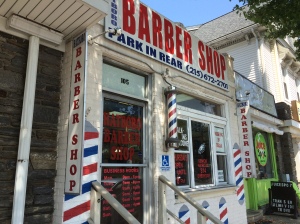 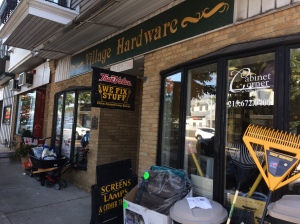 Not unusual for me, I took a lot of photos during the walk. At first I concentrated on bouncily-decorated storefronts and nifty store signs. Who would turn a thumbs-down on the Hatboro Barber Shop’s facade, a parade of red, white and blue? Or on Village Hardware’s “We Fix Stuff” sign, which succinctly (and hopefully accurately) tells a story. Nobody, I’m sure. 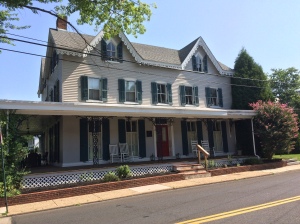 And when I wandered off York Road into the neighborhoods, I was surprised by the goodly number of old, beautiful homes. Had to snap some of their images, of course, one of which is directly above. 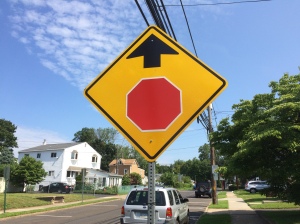 But halfway through the stroll my focus changed unexpectedly, as I became enchanted with the idea of looking for bright yellows. I guess it was a riveting yellow (and red and black) traffic sign on a residential block, meant to announce that a stop sign was ahead, that put the notion into my head.  That and the fact that I was getting some exercise on a supremely sunny day, the Sun being the finest yellow friend that any of us ever will have. Ergo, a patch of yellow flowers aside a house became fodder for my phone’s camera. As did the golden arches of Hatboro’s McDonald’s franchise. 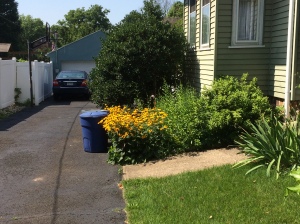 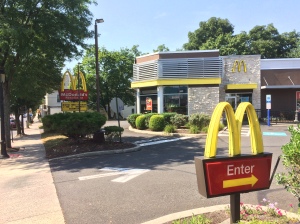 But enough about yellows. Let’s face it, in most regards, the walk ultimately wasn’t very different from nearly any neighborhood walk that one might take. It lasted one and a quarter hours and encompassed two miles. Nothing special about those figures. But here’s what I’m getting at: I enjoyed the heck out of the walk. I was glad to have recovered from my illness, glad once again to be outside breathing freely and taking in the sights.

Which is why it would have been very, very cool if the lyrics to Zip-A-Dee-Doo-Dah had been playing in my mind as I walked around. You know them:

Alas, they weren’t. Still, I’m in tune with the song’s message. Meaning, I know enough not to take things for granted. Hopefully many walks lie ahead. Onward!

(Don’t be shy about adding your comments or about sharing this story. Gracias.)

(If you click on any photo, a larger image will open in a separate window.)

92 thoughts on “Walking Away From A Cold”