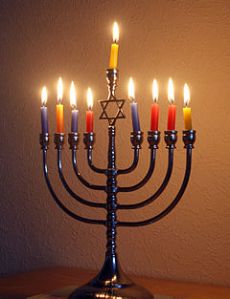 A few nights ago my cell phone began to ring 10 minutes after my wife Sandy and I lit the menorah candles on the eighth and final night of Chanukah. A secular Jew, I’m about as unreligious as they come, but I’m okay with Chanukah candle-lighting. When aglow, those slender wax sticks look so sweet and peaceful, they come pretty close to making me feel all warm and fuzzy inside. Or something or other on that order.

The caller’s name didn’t appear on my phone’s screen, and the displayed phone number didn’t register with me at all. But being in a relaxed and welcoming mood after watching the candles burn down for a while, I did what I ordinarily wouldn’t have done. In other words, I answered the phone.

I opened my mouth to talk, but the caller beat me to it. “Neil! I’ve lost my way! I have enormous doubts about my purpose in life, about my abilities to continue doing my good work, about whether the world really needs me, about . . . ” 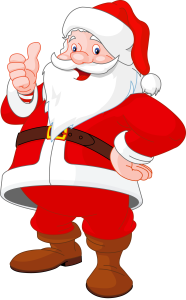 “Neil, it’s Santa Claus. You gave me your number two years ago, remember? I’d have shown up in person, but I’m too down in the dumps to even open my front door and go for a walk. Anyway, a phone call is a lot easier than flying thousands of miles in a sleigh to get to your house. Bottom line is that my wife’s not here to help me, and I couldn’t think of a better person to speak with than you.”

“Neil, don’t get me started on Mrs. Claus. She’s gotten so fed up with my moods and angst, she’s threatening to file for divorce. And she split a week ago. Last I heard she was flaunting her fine Nordic bod on Ipanema Beach, in Rio. Yeah, she enrolled in Weight Watchers last year and the program worked. She used to be on the plump side, to put it charitably, but now the girl is smokin’ hot! Who could blame her if she never comes home to the frigid North Pole?”

“Neil, my problems are so deep rooted, a plumber couldn’t flush them out. I appreciated the help you gave me two years ago [click here to read all about it], and as you know you weren’t the first to keep me focused on my daunting job. But, brother, this time I think I’ve had it. I suppose I’m having an existential crisis. Neil, I don’t see how I can do my toy deliveries anymore. Someone else might have to take over. I’ve done it long enough.”

“Santa, please reconsider. There’s no one who can replace you.”

“Well, then the world would have to adjust. I really need to start thinking about myself at this point. Maybe Judaism holds the answers for me. Should I convert, move to Miami Beach and start wearing that little skull cap . . . what do you call that thing, Neil?”

“Yes! I’d look good in one of those, don’t you think? They’re usually in black, right? Black would match my belt, and I’d be happy to ditch my silly hat with the pom-pom on the end.”

“But, Santa, why the heck would you want to convert to Judaism? The Christian world relies on you. You’re one of its bedrocks. Santa, you’re an icon, someone who should have been awarded a Nobel Prize decades ago, maybe in best costume design. Oh wait, it’s the Oscars that do costume design. Well, shit, then you should have been awarded an Oscar!”

“Thank you, Neil. Thank you. You know, an Oscar would look grand sitting above my fireplace. Which reminds me, I’ve got to throw another log on the fire. I’m freezing my ass off. Be back in a minute.”

A minute passed, and then, true to his word, Santa was back. 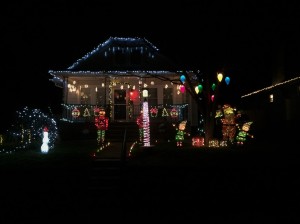 “That’s better,” he said. “It’s starting to feel nice and toasty again inside this icebox that I call my house. I tell you, whoever they were that decided to start inhabiting these far northern regions ages ago were out of their freakin’ minds!” 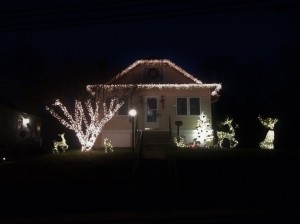 “Neil,” Santa then continued, “I’m uncomfortable bringing this up. It’s a favor of the highest magnitude: If I decide to bail out from my job this month, is there a chance you might fill in for me? I know that Christmas isn’t your holiday, but who else can I ask? I barely know anybody, living up here in no-man’s land. Keith Richards sat on the sleigh with me last year [click here to read about it], but he wasn’t much help, to tell you the truth. He spent half the time strumming an air guitar, so there’s no way I’d ask him to carry the load all by himself. Neil, a large segment of humanity might have to count on you!” 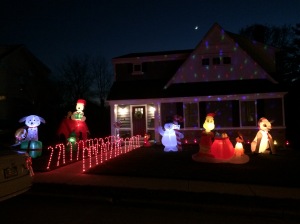 Stunned, I didn’t answer right away. Finally, I spoke. “Listen,” I said, “I want no part of this. I’ve got hemorrhoids, Santa! Raging, powerful hemorrhoids. Endless hours of sitting in your sleigh might be the end of me. But I’ll do it if I have to! I’m that kind of guy!” 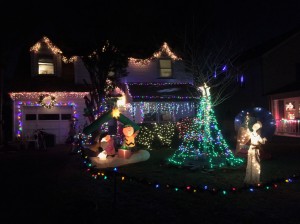 “You’re the best, Neil. The best! Well, actually I don’t know you very well, so there’s a good chance I’m wrong about that. In any event, you have my thanks.” 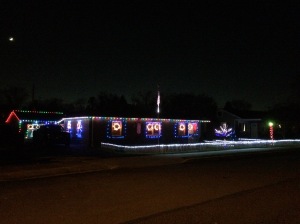 “But here’s the thing, Santa,” I said. “I’m going to go outside in a few minutes. And I’m going to walk around my neighborhood, taking pictures of the pretty Christmas lights that lots of people have put up outside their houses. Then I’m going to write a story about our conversation. And I’ll add a few of the Christmas lights photos to the article. Read that story, Santa. And look at the photos! The lights in my neighborhood got you back on track in 2016, and I’ve got a strong feeling that they will turn you into your jolly ol’ self again this year. And if they do, there will be plenty of time left for you to pull everything together and make your Christmas deliveries. Okay, Santa? Do we have a deal?”

“Goodbye, Santa. I’m ready to do my duty, if need be, but not as ready as you had better be a few days from now. Man up, Santa. Man up!”

(As I always say, please don’t be shy about adding your comments or about sharing this article. Thanks.)

(If you click on a photo, a larger image will open in a separate window.)

107 thoughts on “Will Santa Claus Make His Rounds This Year, Or Will The Job Fall To Me?”