Five or six times each week, for half an hour or so, I haul my sorry ass along the streets of one neighborhood or another, usually my own. I engage in this walking routine for fitness purposes and also just to get out of the frigging house during these pandemic-constricted days. I sure as hell am not a lover of regular exercise, but I’ve come to tolerate it for one reason: I listen to music podcasts as I stride along. Music, as we know, helps to keep boredom at bay. Duh!

One podcast that I often dial up is Downtown Soulville, hosted by a guy who calls himself Mr. Fine Wine. The program appears each week on New Jersey radio station WFMU, and then, luckily for me, is transformed by one form of magic or another into the podcast format.

Downtown Soulville is damn fine. During each episode, Mr. Fine Wine spins soul and rhythm and blues recordings, all of them on 45 RPM singles from his incredibly huge collection of same. He doesn’t talk too much during his shows, which is the way I like it, so song after song after song (most of them from the 1950s, 60s and 70s) hit the airwaves.

When I first started listening to Downtown Soulville I was struck not only by how very few of the recordings I’d ever heard before, but also by how very many of the artists I’d never heard of. This kind of shocked me, because, although I no longer try too hard to keep up with what’s going on in the various sections of the music world, for decades I did, waving my music-junkie flag proudly. I was, and am, into rock, jazz, soul, R&B, blues, reggae, Brazilian, African, classical, folk, and more musical genres. So, how was it that hundreds of soul/R&B singers that Mr. FW has thrown my way, such as Sugar Pie DeSanto, Billy Watkins and Mel Williams, were new to me?

The conclusion that I came to was that, despite being well-informed about music, in a very real sense I don’t know shit about that subject compared to what there is to know. That was a sobering thought. And eventually it set in motion a sequence of questions and answers. To wit: If my knowledge about music is limited, what does that say about me regarding every other subject you can name? Well, I know even less about them than I do about music, in most cases incredibly less. But, okay, does that really matter? Yes, it does, since acquiring knowledge is a worthy goal. Sure, but nobody can imbibe everything, right? True, and, what’s more, it’s exhausting to try to. Indeed, but that notwithstanding, aren’t there things you’d love to understand more about?

The answer to that question is a no-brainer: Damn straight! 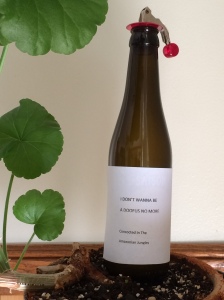 For instance, how come I Don’t Wanna Be A Doofus No More, the personality-enhancing potion that George Clooney gifted me with a few years ago (click here to read about it), isn’t helping me anymore? Man, that elixir cured me of being a schlemiel for the good long while that it worked. Clooney, I’m going to sue you if you don’t rectify this situation!

And how come Alicia Keys, Halle Berry and Jennifer Lawrence haven’t gotten back to me regarding the messages I left with their agents? What, the ladies have something against hanging out with a dorky septuagenarian? Did they somehow learn that I Don’t Wanna Be A Doofus No More no longer is having salutary effects upon me?

And, though not as pressing as the issues that I just mentioned, what’s the deal with the universe? Specifically, how did it begin? Yeah, yeah, there’s the Big Bang theory and all, but here’s the thing about that: If all the matter that became our universe once was contained in an impossibly-compressed chunk of whatever, as the theory states, where the f*ck did that chunk come from? Did it always exist? Is it possible for something to always exist? Boys and girls, truer words than the following rarely have been written: I sure as shit don’t know.

I tell you, all of this mental work is tiring me out big-time. Having reached my deep-thoughts limit, there’s little doubt that my living room sofa, and naptime thereupon, await me. Before I sign off, though, let me say that I’m always glad to receive readers’ comments, so please don’t be shy about adding yours. Goodbye, then, till next time. I’ll leave you with the songs that I heard on Downtown Soulville the other day by the aforementioned Sugar Pie DeSanto, Billy Watkins and Mel Williams. Hope you enjoy them.

110 thoughts on “What Do I Know? Good Question”