Man, not only did I wake up feeling kind of blue on the 15th of February, several hours later my funk was still hanging around. Knowing that I needed to take some action I picked up the phone to call my psychiatrist, Dr. R. U. Forereel. But a second later I thought better of it, because, after all the many years that I’ve been spilling out my guts to her, I knew what she would say.

“Are you for real, Neil?” Dr. Forereel would have replied to my explanation of the situation. “Why are you wasting my time over such a trivial matter? Everybody gets the blues now and then. Get off your scrawny rump, Neil, and go for a walk. That’s all you need to do to start feeling better.” And then she’d have hung up abruptly. And, hopefully, would not have sent me a bill for the brief phone session.

Yeah, the first half of February, blessing my part of the globe (I live near Philadelphia, Pennsylvania) with lots of snow, ice and cold temperatures, was a big pain. Having lived with those kinds of conditions for most winters of my life, I’m used to them. And, normally, I grin and bear them.

This year, though, slowly but surely winter’s assaults got to me, and I became symptomatic on the 15th. Seeing that my usual morning activities (drinking coffee, doing sudoku puzzles and scratching my balls) weren’t dissipating the blues at all, I decided to take the advice that Dr. Forereel would have offered. Thus, at around 10:30 I bundled up real good. Then I fired up an episode of The Many Moods Of Ben Vaughn, an excellent music podcast, on my phone, stuck earbuds in my ears and headed out the door to stroll around my suburban winter wonderland. 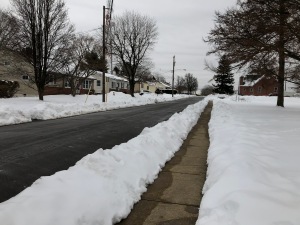 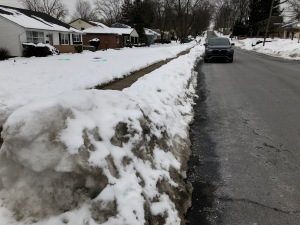 Wonderland? Nah, anything but. Sure, everything looked nice and idyllic right after the first of several snowstorms in early February. But, by February 15th, examples of beauty in my neighborhood were few and far between. That was only to be expected, of course, as snow plows had done their thing two or three times, piling ungainly mounds of snow and ice along the sides of every street. And sidewalk and driveway shoveling had added to the mess. An exception was the Willow Grove Bible Church, which was a pretty charming sight. Overall, though, I gave a rating of anywhere from meh to crap to just about every scene that met my eyes.

Plus, the grey skies weren’t doing anything to lift my spirits either. Ben Vaughn, on the other hand, was. I’ve written about Ben before. Each episode of The Many Moods contains an impressive mixture of musical genres. As I strode along my neighborhood’s blocks on the 15th, the tunes that poured through my earbuds improved my mood. Especially, by far, the hard-rocking ones. In fact, when I’d left the house I instinctively knew that in-your-face drumming was what I was in need of. Fortuitously, during the first 20 minutes of Ben’s show I heard three songs that featured such. They put pep and purpose into my steps. They got my juices flowing. No doubt it would be a good idea now for me to present them. Here then, via YouTube, are rad rockers by Mott The Hoople (“All The Way From Memphis”), Chuck Berry (“Almost Grown”), and Nick Lowe (“Half A Boy And Half A Man”). My humble story continues below them.

But you know what? The uplifting effects of my 45-minute walk didn’t have staying power. When I arrived back home I was feeling no more than 30% better than I did when I began the trek. Shit, it was just one of those days. I suppose that the pandemic was feeding my blues too. My wife and I, like just about everybody, have been limited in our activities since coronavirus reared its ugly head last year. But at least we were able to eat outdoors at restaurants and entertain friends outdoors at our home when the weather was decent.

We can’t do the same when it’s cold outside. And, because we are cautious when it comes to the virus, indoor dining and indoor entertaining definitely are off our schedules. What a drag, drag, drag.

Anyway, I’m a sucker for happy endings. They sure as hell make life seem better. And I’m going to present one to you. Yes, for reasons unclear to me, my skies began to brighten around 5:30 PM on February 15th. And by 7:00 PM I was back to being my normal self. You know, a grumpy, head-halfway-up-his-scrawny-ass septuagenarian. I haven’t always been a septuagenarian, but grumpy and head-halfway-up-his-scrawny-ass have been pretty accurate descriptions of me for years. Yo, nobody’s perfect!

(Please don’t be shy about adding your comments. Gracias.)

137 thoughts on “A Case Of The Winter Blues”