Well, here I am at my writing post on the afternoon of the Ides of March. That’s a date that proved to be a real bad one for  Julius Caesar but hopefully will be benign for yours truly. It’s cold outside, as in 23°F, and my suburban community is weighed down with billions of tons of icy snow that fell from the heavens yesterday. This white stuff is so dense it won’t be going away anytime soon. There’s nothing like a late winter storm to disrupt gleeful thoughts of approaching springtime. Yippee-yi-o-ki-yay, baby.

Earlier today I published one of the oddball stories that, if I had any degree of fame, I would be famous for. Or maybe infamous. Anyway, it partly was about the dilemmas that confront me and surely a fair number of other scribes when it comes to figuring out what in the world to write about. Happily, I am not conflicted about the direction that the present essay shall take. After I kicked around several bushels-worth of slippery notions, things fairly quickly coalesced. Meaning, I have decided to spend some words on a song that is good for cold, ice-laden days such as today. This tune is good for any day, really. It is among my fave recordings of all time, and I think it will elevate my mood as I press forward with this narrative. The song of which I speak is California Stars, a joint production of Billy Bragg, the band Wilco and the late singer and songwriter Woody Guthrie. A better companion I could not hope for. Here it is:

California Stars came out in 1998 on the Bragg/Wilco album titled Mermaid Avenue. Mermaid Avenue is the result of a project that Nora Guthrie (Woody Guthrie’s daughter and Arlo’s sister) put into motion. Her father, who bid adieu to Planet Earth in 1967, had left behind scads of completed lyrics that he hadn’t gotten around to recording. Their accompanying music might have existed in Woody’s head, but those melodies and harmonies never will be known, as Woody was unable to notate music. Nora asked Billy Bragg, a British singer-songwriter, to sift through the lyrics, pick those that wowed him and put them to music. Bragg brought the Wilco fellows aboard to help with the composing, playing and recording processes.

Now, the entirety of Mermaid Avenue is great. I was left kind of breathless when I first spun the CD soon after its release. But one song in particular of its 15 went straight to my heart. California Stars, of course. And I tell the truth when I say that every time I’ve heard California Stars since then, and that’s probably close to 100 times, its effect has been the same.

To me it is a perfect creation. Woody’s lyrics are sweet and simple. In two verses they tell the tale of a discontented someone, likely Woody, who pines for a more idyllic life with his female mate. The California stars of which he writes are the beautiful things that, along with her touch, might help soften his woes. Here’s the second verse:

Gorgeous, Woody, gorgeous. But to be honest, I’m certain that Mr. G would have been unable to put his words to music as lovely and endearing as that composed by two of the Wilco boys, Jeff Tweedy and the late Jay Bennett (he passed away in 2009). Clearly captivated by Guthrie’s images, they found the essential combination of notes to encase the lyrics in. Seductively childlike, their work allows Woody’s poem to rise into the clouds and beyond. 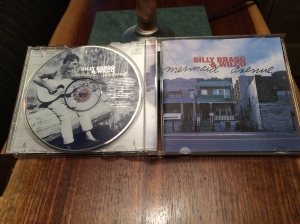 And that’s where the song takes me whenever I pay it a visit. A short while ago, in the name of research for this piece, I listened five times to California Stars. Talk about multiple pleasures. And, as if the lyrics and music aren’t fine enough, I began to think that the song’s arrangement and instrumentation and Jeff Tweedy’s lead vocals are the keys to its star power. That’s a discussion that undoubtedly would go on for days, maybe eternally, among the song’s devotees.

I mean, Jeff Tweedy was born to sing this song. He’s a salt of the Earth kind of guy who quietly burrows inside lyrics, finding their core — loneliness or optimism or whatever the case may be. He does this straightforwardly, unaffectedly, an approach that in his hands is right on target. In California Stars, loneliness and optimism are entwined in Guthrie’s vision. Tweedy does the words proud.

Looking down at my star bed this afternoon I flowed with Tweedy’s calm voice. And I rode the gentle waves formed by a yearning and shimmering lap steel guitar, a grinning piano and a bobbing electric bass guitar. And when a fiddle started fiddling joyfully for a few seconds after the second stating of the second verse, I drifted even higher. Miraculously, those instruments touch the skies more than they might have. The elemental drumming pattern that Ken Coomer sagely locked himself into saw to that — a steady and unbroken string of thud-thuds never sounded so good. Sometimes things come together in mysteriously ideal ways. That is the story with California Stars.

Whenever California Stars draws to its close, as it inevitably must, it takes me a few moments to gather myself. I open my eyes (they’d been shut, you dig, the better to float) and begin my return to what passes for reality. And as this story too now nears its conclusion I’ll add another thought about endings: When I’m on my way out, breathing my last, I’d like to be serenaded with California Stars. The Mermaid Avenue version, needless to say, as there have been others in its wake. That’s the way to go.

(Notes: Wilco has seen musicians come and go over the years. Of its six current members, only two remain from the Mermaid Avenue days — Jeff Tweedy and bass player John Stirratt. As for Billy Bragg, his career is going strong. Ditto for Wilco’s.)

This is a story about life’s little surprises, about how one thing leads to another. In this gentle instance an unexpected impulse to relocate my duff from indoors to outside resulted in my hearing a song that I can’t get out of my head.

There’s something naturally relaxing about sitting outdoors when the weather is pleasant. Some people sit in parks, some on beaches, some a few feet from doors to their homes. One of my pals lives in Philadelphia in an old comfortable house, a sprawling place with a front porch. On evenings when the Philadelphia Phillies are taking the field, my friend positions himself in a porch chair, balances a small radio on a table beside him and turns on the Phillies station. He remains there till the game is over. This routine helps him stay calm.

I should emulate my friend’s fresh air example more often. I used to sit outside frequently, mostly on the deck behind my house, but haven’t much in the last few years. Most of my sitting and downtime in that stretch has taken place on the sofa in my living room. On a recent Monday night, however, a powerful urge to visit the great outdoors came out of nowhere, and so I stepped onto the deck as dusk was settling in, and sat at the deck table. The temperature was ideal, the evening peaceful. At least ten houses are within 100 feet of the deck, but they became less and less visible through the trees as blackness approached. These were conditions that agreed with my inner yearnings. That is, I felt isolated, away from it all. And three things made the scenario even better: Food, beverage and music. Munching on Cheez-Its,  sipping iced tea and, most important to this story, listening to my portable radio, I was as relaxed as I’m capable of becoming. The radio was tuned to WXPN.

In the Philadelphia region WXPN is the go-to station for rock, folk, blues and nearly any other non-Ariana Grande musical genre you can name. XPN plays everything from The Beatles to Mavis Staples to Caetano Veloso to Laura Marling. And the station makes it a mission to keep up with the continual avalanche of recorded music from established and never-heard-of-them-before musicians. Airing on XPN as I sat beneath the stars and amidst pulsating fireflies was a program showcasing nothing but new songs. And the tune that issued from my radio at about 9:00 PM swept me from my state of relaxation to a much higher plane.

There are certain songs over the years that infatuated me from the moment I first heard them. In 1968 it was Jumpin’ Jack Flash, by the Stones. To this day it stirs me up every time I hear it. California Stars, by Billy Bragg and Wilco (and lyrics by Woody Guthrie), brought me to my knees in 1998. I’ve added another number to the list of instant infatuations, all praise to WXPN’s new music show. The song is Ashes. Its singer and writer is Lindi Ortega. Ashes overwhelmed me on my deck. I think that the calm within and without me had unlocked fully the doorways to my emotions and ushered Ashes in. From its opening notes, Ashes in a good way made me shiver and melt. It went straight to my truest spaces.

I had come across Lindi Ortega’s name in print in the past but wasn’t familiar with her music. As I’ve learned, she’s a Canadian now living in Nashville and plays and composes smart country-hued material à la Emmylou Harris and Patty Griffin. With Ashes she and her production team have created a wonder, a stirring song about the need for love, the pain of loss. The heartbeat bass lines, the steady tension-inducing drumming, Lindi’s pleading and impassioned vocals that grow as the song develops, the soul-gripping guitar solo at the song’s three minute mark . . . Ashes to me is perfection. “Darling, this is madness, why don’t you come back to me?/Don’t leave me in the ashes of your memory.” Indeed. Indeed. When Lindi next appears in or around Philadelphia I’ll be at the show. For now, I’ll listen to Ashes on YouTube, where Lindi has gifted it to the world in advance of its release next month on her album Faded Gloryville. I recommend that you do the same. Here is Ashes:

(If you enjoyed this article, then please consider sharing it. Thanks.)