As loyal readers of this publication know, I have a propensity to mention that not only am I getting old, I strongly dislike getting old. I mean, what’s to like? I’m at the point where even if I were to live another 25 years, an unlikely occurrence that would take me deep into my 90s, the end sure as shit is still a whole lot closer than the beginning. Depressing, man, depressing.

Maybe that’s one of the reasons why I get a kick out of wandering around in search of that which is new to me. I tend to believe that a steady diet of fresh experiences possibly has the ability to hold back Father F*cking Time. In any event, encountering the new sure helps to keep your brain cells firing, to bring at least the semblance of a smile to your face, and to make most days decently bright. And so, off I went recently to a couple of places that I’d never visited before and was more than curious to investigate.

I live not far from Philadelphia and head into that interesting city, which contains an almost endless supply of things to do, three or more times each month. On August 8, I decided that I’d go there to check out The Rail Park, which began as an idea in the early 2000s and became a reality when its first, and to-date only, section opened in 2018. Three more sections are on the drawing board. (If plans for the creation of those sections interest you, then feel free to click here to learn about them.)

Luckily I did a bit of googling before leaving the house, otherwise I’d not have known that another elevated park, Cira Green, occupies space in Philadelphia. As far as I know, The Rail Park and Cira Green are Philly’s only places with greenery that are up in the open air.

Close to central Philadelphia’s Chinatown section, The Rail Park was created by a partnership of forward-thinking area residents and governmental and private entities, and is built on what were abandoned, elevated Reading Railroad tracks. Those tracks once brought freight and passengers into and out of The City Of Brotherly Love. They were last used for those purposes in 1984.

And Cira Green? Well, unlike The Rail Park it’s not under city government’s oversight. It’s an entirely private enterprise, but everyone is welcome there. Its home is the roof of a parking garage that sits between two modern towers. (The two towers, the parking garage and Cira Green collectively are known as Cira Centre South.) Cira Green opened three years before The Rail Park did and rubs shoulders with The University Of Pennsylvania and with Drexel University in the enormous part of town known as West Philadelphia.

I took in Cira Green first. I rode the parking garage elevator to the 11th floor and then walked up a staircase that leads to the roof. Voila! Cira Green spread out before my eyes, one and a quarter acres of walkways, terraced lawns, shrub and flower beds, and a sprinkling of trees. There’s a burger and beer joint on the grounds too, and a big tent where organized events are held. Lawn chairs and chaise lounges were scattered around.

Cira Green is a solid piece of work, and dozens of people were there enjoying the sunny day. But it ain’t knock-your-socks-off beautiful. If it were on ground level it would be considered fairly pedestrian. But it’s not on ground level. One hundred and fifty or more feet above the streets, it provides a motherlode of fab views. Damn right I didn’t plop my ass into a chair or chaise lounge. What I did was walk all over the place, checking out those views.

Skyscraper-loaded central Philadelphia, across the murky Schuylkill River, gave me a buzz, as did West Philadelphia’s kaleidoscopic patterns, dominated by tans, browns and greys. But what I also couldn’t keep my eyes off of were the reflections in the facades of the two giant buildings flanking Cira Green. A person, such as I, could get lost in those reflections.

One public transit ride later, not to mention blocks and blocks of walking, I found the stairs that lead to The Rail Park. The park is in a gritty neighborhood that goes by various names, including Callowhill. Much of Callowhill went up in the 1800s. The area has an industrial look, which figures, because many factories once produced goods there. A few still do. Others have been converted to residential use. Parking lots are part of the landscape too, as is a dense array, too dizzying for me to digest, of other structures. The Rail Park was needed. It’s the only park in Callowhill, the only green refuge.

I liked The Rail Park. A mere 20 or thereabouts feet above street level, it doesn’t command the types of views that Cira Green does. But that was alright with me. As I walked back and forth along the park’s quarter of a mile length of planks and gravel paths, I looked here and I looked there, admiring the otherworldliness of the electric company substation very near the park and enjoying the neighborhood’s overall no-nonsense ambience.

The park’s plantings are pretty. The oversized swings struck me as a delightful touch. Basically, The Rail Park, at least during the moments I spent within it, was very welcoming. I felt comfortable and at home. If I lived in its vicinity I’d head over there now and then, book in hand, and find a comfortable perch on which to read.

One guy was doing exactly that. One young lady walked her dog. Two couples huddled, exchanging sweet nothings or something of that order. And a few folks of various ages, including an old guy, one of my peers, relaxed on the swings. Yeah, I definitely liked The Rail Park. I hope that Callowhill’s and Chinatown’s residents have come to embrace it, or will.

In closing, I tip my metaphorical hat to Philadelphia, a city that always has inspired me. Without Philadelphia, this website would be hurting for content. For real.

(As I almost always say, please don’t be shy about adding your comments or about sharing this story. Gracias.)

(If you click on any photo, a larger image will open in a separate window.) 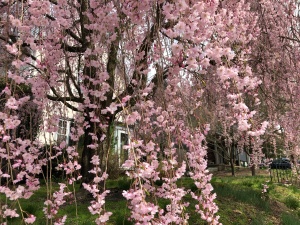 The morning of April 13, a Saturday, was drizzly and grey. But the weather forecasters swore up and down that by early afternoon the Sun would be smiling broadly upon us. Damned if they weren’t right. It was, I decided, a good afternoon in which to take action.

Scads of flowering trees had burst into bloom during the previous few days. And because this annual seasonal display doesn’t last all that long, and because I’m the sort of guy who likes to commune with nature every now and then, I figured I better get hopping if I wanted a good look at the show. So, at 2:30 PM I drove to Jenkintown, a town near mine in the Philadelphia burbs. After parking on a tree-infused residential block, I spent 75 minutes imbibing a healthy amount of spring 2019. 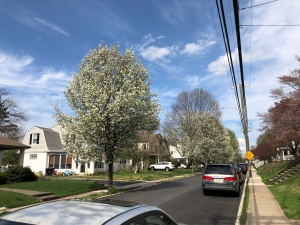 Why Jenkintown? Well, it’s an attractive and tidy place. And I know its layout well. What’s more, I have ties to Jenkintown. It’s where my barber does a magnificent job of styling the five strands of hair that remain on the crown of my head. It’s where my wife Sandy and I go out to dinner fairly often. And, most important, it’s where she and I bought our wedding rings. Yeah, Sandy likely would have threatened to knee me in the balls if I hadn’t included most important in that last sentence. But that has nothing to do with why I wrote those words!

Jenkintown was, as expected, peaceful and calm while I trod upon many of its blocks. I saw people of all ages outdoors taking advantage of the warm, comfortable conditions. Some sat on their porches. Others puttered in their yards. One eight or nine year old bounced somewhat proficiently on a pogo stick. And two little kids streaked wildly on their scooters, up and down a sidewalk, as their father kept an eye on them. It was a nice day.

And I heard birds, a lot of birds, though I didn’t see any of them except for a few that were zooming real high in the sky. I don’t know much about them, but I’m not a total nitwit when it comes to our avian friends. I proved that to myself by recognizing the caw, caw, caw of a crow a few minutes into my walk. 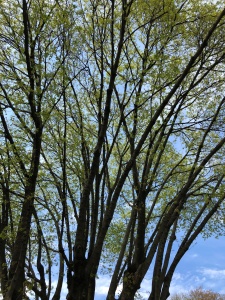 And what about vegetation? For one thing, Jenkintown was looking a lot greener than it had in months. Most deciduous trees were not yet in leaf, but a few were, and they were beautiful. What’s more, much shrubbery had traded drab greens for sprightlier shades of that color. 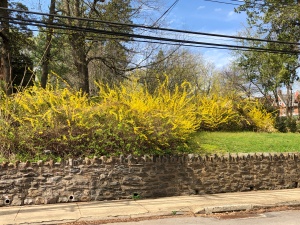 Forsythia bushes, which had opened in my region in late March, rocked their yellows throughout the town. Ground-level flowers were starting to pop up all over the place. But where the hell were the azaleas? I saw only three. Maybe somewhere in Jenkintown were a bunch of “Azalea Bushes Are Not Welcome In This Community” legal notices.

And then there were the flowering trees, the main subjects that I had left my house to examine and to write about. Jenkintown doesn’t boast incredible numbers of them, but there were more than enough. I stopped to admire most that I crossed paths with.

When it comes to flowering trees, magnolia, pear and cherry are the varieties in favor in Jenkintown. Their petals abounded, flaunting pinks, whites and pale greens. On one property I saw a powerful reminder, though, that the show’s days are numbered, because the lawn and sidewalk there were blanketed with magnolia petals. Before long, similar scenarios will be playing out all over town.

As my stroll was coming to a close I passed a house on whose lawn a young tree grew. It was scrawny but in flower, displaying a color I’m positive I’d never seen before on tree petals. Yellow. A soft, milky yellow. As with birds, my knowledge about plant life ain’t much to write home about. That’s why, a short while ago, I turned to Google for enlightenment. I’m now offering the possibility that what I was looking at is a member of the magnolia family, though I sure as shit wouldn’t bet my life on that. Some of my readers are wise in the ways of flora, and I’m hoping that they will set me straight.

The time to go home arrived. I’d more than met my minimum daily requirement of nature. Therefore, into my car I eased. And you know what? It was hot as hell inside the mighty machine, 10 degrees hotter than it was outside. That’s what happens when you forget to leave a window cracked. Within seconds sweat began pooling on my forehead. Plenty of it. And of course the sweat headed downward, saying a nasty hello to my nose, lips and chin, and reminding me that summer is on the horizon. I hadn’t thought about summer in a long time. I’m not a fan of that season. F*ck summer heat. F*ck summer sweat. I prefer spring.

(Please don’t be shy about adding your comments or about sharing this piece. Gracias.)

(If you click on any photo, a larger image will open in a separate window. All photos were taken on April 13, 2019 in Jenkintown, Pennsylvania, USA.)