“You’re shvitzing like a pig,” my wife Sandy observed last week when I strode into the house after one of my highly infrequent walks around the neighborhood. Incredibly, I hadn’t realized how excellently the sweat was pouring off of me. Call me Mr. Observant. As I unbuttoned and took off my sopping shirt I thought to myself that I’d have inserted the word f**king before the word pig if it had been me commenting in Sandy’s place. She’s a lot more refined than I am.

Amazingly, the stroll around my little corner of the Philadelphia burbs was my first since last December, a nighttime excursion I undertook to gaze upon Christmas lights. I wrote a story about that adventure, and if you’re interested in reading it you should click right here. Last week’s stroll was different. With my trusty iPhone in hand I hit the streets for an hour in late morning, looking for pretty flowers to admire and photograph. Particularly those on trees and shrubbery. The sun was beating down rippingly as I left the house, the temperature already about 85° F, and the humidity was formidable. But I was late for the party. Turns out that virtually all of the flowering trees, and most of the flowering bushes, already had dropped their glitter.

What, then, did I see?  Greens, man, greens. I walked past hundreds of houses, all with nicely-trimmed lawns, and past thousands of trees, and the expanses of shades of greens made my eyes stand at attention. But I was on a quest for colors other than those, and needless to say they were there to be spotted. True, I didn’t find a single azalea still in glorious bloom. But rhododendrons, yes, and quite a few other bushes I won’t go out on a limb and try to identify, as I ain’t exactly John Bartram or John Muir. And though 99.999% of dogwoods and other flowering varieties of tall barky objects had not a remaining petal hanging on their branches, I discovered one cute tree still dressed in white.

“Yo, Nature Boy,” I heard someone shout at me two seconds ago. “What about planted flowers? Or was Nature Boy not seeking them?” Well, I’ve got an answer: I sought and I found. But something I never had realized before about my neighborhood is that there is no glut of those beauties. I saw a lot of nice ones, sure — roses and don’t ask me what else, because, as I already mentioned, I ain’t exactly . . . Yet many homes had no flowers in beds or windowboxes at all. Maybe I should report my area to The Philadelphia Horticultural Society. Or to Ripley’s Believe It Or Not. Yeah, that’s what I should do.

Still, my walk was a good one. As I said in my Christmas lights story, I need to get out into my neighborhood, beyond my block, more than I do. There’s plenty to look at, if you force yourself to really look, even though my suburban development, like all suburban developments, isn’t on anyone’s bucket list of places to visit. And, importantly, there’s no dog crap to step on, as the dog owners around here are well-trained in picking up after. One thing for certain is that next spring I’m going to wander a few weeks earlier in the season. The neighborhood’s flowering trees and bushes fully were ablaze from mid-April through mid-May. Regrettably, my views of them mostly were from a moving car, and that’s no way to experience the world if foot power is an option. I’ve set myself a reminder.

In conclusion, I’m going to give a big shoutout, as the half-assed expression goes, to my newest best friend: my iPhone. It took some pretty nice pictures the other day. I offer up a selection of the colorful sights. By the way, if you click on any photo, a larger image will open. And one last thing: Don’t be shy about adding your comments, or about sharing this article with others. 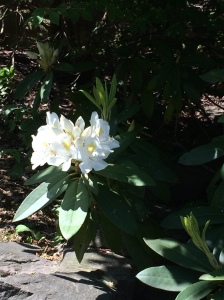 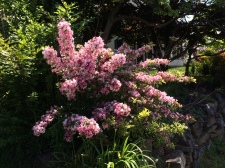 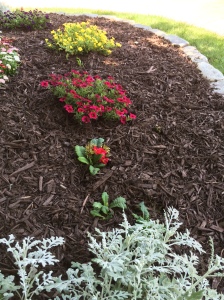