During our vacation on Cape Cod in October, my wife and I poked around the cute town of Chatham one fine, sunny afternoon. While my much better half busied herself in the aisles of a store or two, I went into the Chatham Orpheum Theater to try and find out which films would grace its screens in the upcoming weeks. Thumbing through the theater’s brochures at the ticket counter, I overheard a conversation taking place between the guy behind that counter and a patron. They were discussing literature, and one of them mentioned Cacciato. Man, I’d heard of Cacciato, so I opened my trap and said so.

“Are you talking about Going After Cacciato, the novel by Tim O’Brien?” I asked them. The ticket seller gave me what I interpreted as one of those Huh, this asshole knows about Cacciato? looks, but I wasn’t offended. Anyway, it turns out that the two fellows mostly had been gushing over another of O’Brien’s works, The Things They Carried. They briefly told me about the book, which came out in 1990 and, like Going After Cacciato, was inspired by the time that O’Brien spent in 1969 and 1970 as a soldier in Vietnam. It sounded intriguing. “Do you want me to write down the name for you?” the ticket seller asked. Indeed I did, and so he did. Into my wallet the slip of paper went. 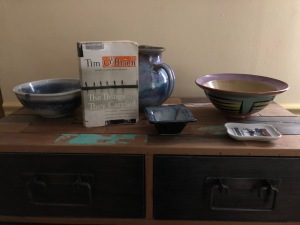 Not long after I got back from vacation I borrowed The Things They Carried from a local library. I finished it last week. And I have to say that the gents were right. A series of interconnected, semi-fictional stories about the Vietnam War (pre, during and post), the work impressed me. It doesn’t glorify war, doesn’t dwell on battles. What it mainly does is lay on the table the emotions and mindsets of people attempting to deal with potential, immediate and imaginary dangers. You’ll find the good, the bad and the ugly in this book. And also the mysterious and the truly touching. In the best of the stories, O’Brien’s words come at you like the blows of a patient, precise boxer. Clearly, I recommend The Things They Carried.

Recommendations. There are a few other new ones kicking around inside me. And there’s no way I can contain them, so desperate are they to meet and greet cyberspace. With no further ado then, here they are.

A biopic of sorts about the late Fred Rogers, host of the legendary kids’ show Mister Rogers’ Neighborhood, has just come out. A Beautiful Day In The Neighborhood is its name, and it stars Tom Hanks as Rogers. Now, I know that Fred was a strong force for decency and love. But his nasally voice, his sloooow talking pace, and his unnervingly calm manner never appealed to me. Nevertheless, my wife and I went to see the film a handful of moons ago. And I loved it. Having read no reviews in advance, I was happy to discover that it is not a typical biopic. Instead, it’s an imagined examination of the relationship between Fred and a cynical journalist named Lloyd Vogel, who is assigned, in 1998, to interview and profile Fred for Esquire magazine (the movie is drawn from the friendship that developed between real-life journalist Tom Junod and Fred).

A Beautiful Day rings very true. Hanks is Fred. And decency and love are largely what the movie is all about. Will Lloyd Vogel come to believe in the powers of Fred? I ain’t saying. Will Fred start talking faster and become the type of guy I’d want to discuss sports, music, food and girls with? Nah, but that’s more than okay. A Beautiful Day In The Neighborhood flirts with sappiness here and there, sure, but it got to me anyway. That’s because it gently aims for the heart and doesn’t miss. 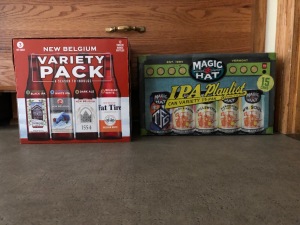 Hey, it’s almost dinner time in my household, so I’ve got to wrap this up. You know what else is good? Beers from Magic Hat and New Belgium breweries, that’s what. In November I bought variety packs of their robust, soul-satisfying ales. And I’m going to apply those same adjectives (robust; soul-satisfying) to the coffees that Allegro and Green Mountain coffee companies turn out. My wife and I are hooked on several of their roasts. I’m tempted to use the adjectives also to describe myself, but I’d be lying out my ass if I did. So, I won’t.

The ball is now in your court. What’s been ringing your chimes recently? Down below is a section where you can enter your comments.

Before I go, though, I have to mention and recommend a golden oldie — Bernadette —  that has been stuck in my head for a few weeks. I’ve heard it dozens of times in my life and always dug it. But when the tune came on the radio not long ago it walloped me like never before. Bernadette, by The Four Tops, was released in 1967. And it’s never gone away. Such a great song. The desperation in lead singer Levi Stubbs’ voice sends chills up and down my ol’ spine. I don’t like having earworms. But if I’ve got to have one, this is an excellent choice. Bernadette!

It’s now 7:20 on a Wednesday morning as I sit my ass down to type this little opus. It will be my final post for the year during which Donnie Trump first sat his ass down behind the desk in the Oval Office. His ass, unlike mine, is fat. And he, unlike me, is nasty, intolerant and a pathological liar. Just sayin’.

“Hey, Neil,” my wife Sandy, who is staring over my shoulders at the computer screen as I peck away, said two seconds ago, “I thought you weren’t going to talk about Trump in this essay.”

Well, she’s right. He’s depressing. Maybe I’ll turn my attention to other topics, such as Yemen and Myanmar (the former Burma). Wait — am I nuts? The horrors going on in those regions are immense. Talk about depressing. I tell you, I’ll never understand what the story is with the human race. Actually, I do understand. Bottom line is that scads of people just don’t like scads of their fellow women and men. Never have. Never will.

“What are you doing, Neil?” Sandy just asked. “You told me 15 minutes ago that you were going to keep this story light. You know, like all the other disposable, puffy pieces that you’re known for churning out. Get back on track, boy! You’re out of your realm right now.”

Thank goodness I’m married. Okay, Sandy, let me see what I can do. Enough about Trump and hatred. Hmmm, an end-of-year story should offer some words of wisdom, shouldn’t it? Wouldn’t hurt. And though I’ve always been more than a bit low in the wisdom department, I did have a good thought or two in a recent article. Here’s what I said: “ . . . if there’s anything I’ve learned over the years it’s that being friendly to people right and left is the way to go. It won’t kill you. Or so I’m told.” Imagine that — me quoting me! There’s a first time for everything. Or so I’m told.

Moving right along, folks, I might do well to mention a whole lot of things that satisfactorily filled my well during 2017, excluding those I’ve previously oohed and aahed about on these pages. But to avoid being at my keyboard for the next three days I’m going to forget about a whole lot of things and limit myself to only two. Which two shall it be? Ah, yes . . .

Number one: If you want to dive into a better than average novel, may I suggest you glue your eyes to Perfume River, which came out in 2016. Robert Olen Butler, an acclaimed author whom I basically knew nothing about before almost randomly pulling Perfume River off a local library’s shelf a few weeks ago, penned the graceful volume. The book’s narrative floats easily between the near-present and the Vietnam War eras. That war impacted the lives of the Quinlan family in mega-blast ways. The book examines their plights, the decisions that brought them to where they are, and the secrets they hold from one another and, in truth, from themselves. What insights into their own makeups and into those of others are people able to gain as the years elapse? Perfume River is where to look to find a number of delicately-threaded answers to that question.

Number two: Do you enjoy exuberant, scarily good music? Then go to see Mbongwana Star, the band from the Democratic Republic Of The Congo that melds African melodies and rhythms with blazing rock and roll. Your chances of ever catching them, though, aren’t large. The band does tour, but not all that much. That I was in their presence over the summer is, to me, rather miraculous. And their performance was, by a reeeeally wide margin, the best I took in during this expiring year.

I’d never have been at their concert were it not for Later . . . With Jools Holland, probably the best music show on television. In the early months of 2017 I caught a repeat episode (from 2015) of Later, which is taped in Great Britain, and was floored by one of the bands appearing on it. Mbongwana Star, needless to say. Their name stayed with me as the months passed. And that is why I nearly fell off my living room sofa when, in June, I saw on Abington Art Center’s website that Star was scheduled to perform on the center’s lush, rolling lawn the following month. How was this possible? How had the center even known about this band? Whatever, I wasn’t complaining. I was exalting. Abington Art Center, in the Philadelphia suburbs, is only three miles from my house.

This show was to be among Star’s final on foreign shores for 2017. Sandy and I arrived early, grabbed a good spot on the lawn for our folding chairs, and waited for the group to come on.

Well, unstoppable, roaring power blasted from the stage from the opening notes. No ballads for Mbongwana Star. Rarely do I rise from my chair at concerts to boogie, but boogie I did, heading down to within 15 feet of the stage and kicking out the jams in my inimitably nerdy, old-guy manner. It was fun of the highest order. Here’s a video of the band playing in Europe in 2015:

Besides Star’s incredible musicianship, the astounding thing to me was that two of the performers, both of whom are vocalists, are in wheelchairs, victims of childhood polio. And yet these gentlemen, dealing with profound problems, are able to celebrate magnificently through their music. Some remarkable people are on our planet, and Theo Nzonza and Coco Ngambali are among them.

Like I said, I’m limiting myself to only two items. And (sometimes) I’m a man of my word. Thankfully, this article has manifested itself fairly fluidly, rather than in the fits and starts that are common for most of the pieces that I write. I take that as a good sign. And so, I now shall conclude the proceedings by wishing one and all a safe, happy and healthy 2018. A relative smattering of hours after I hit the Publish button for this story, Sandy and I possibly will be at Penn’s Landing, part of Philadelphia’s waterfront. If we’re there, we’ll gape at the fireworks being launched in the middle of the Delaware River. We’ve ushered in many previous New Years precisely like that. Let there be light.

(If you enjoyed this article, then please don’t be shy about adding your comments or about sharing it)