On a recent Friday night my wife Sandy and I went to dinner with our great pals, Liz and Rich. We dined in Al Dar, an atmospheric Mediterranean-cuisine bistro in Philadelphia’s western suburbs. As the four of us wolfed down lots of good stuff, Liz asked Sandy and me what we had on the agenda for the following day. Because the Philadelphia area was in the middle of an amazing December warm weather streak, any upcoming rain-free day would be a great one for outdoor exploration. “Maybe we’ll go to Fishtown,” Sandy said. And that’s what we did.

Fishtown is a Philadelphia neighborhood fairly near the city’s downtown sections. It is a maze of narrow streets, with a few big avenues running through, and for most of its existence has held a blue-collar reputation. Until a handful of years ago, Fishtown wasn’t somewhere you’d have had any particular reason to go to, unless you lived there. But times change, and sometimes for the better. Fishtown’s rowhouses and small single homes have found favor with millenials, hipsters, musicians. And with those fine folk have come cool bars and eateries and music venues. Fishtown now is on the map, though its goodly number of empty storefronts and how-do-they-stay-in-business businesses show that there’s plenty of climbing yet to do.

I like wandering on cute blocks, especially when they have nifty or unusual names. And Fishtown is full of those: Crease Street, Eyre Street, Shackamaxon Street. Yeah, Shackamaxon. I’d never heard of half the streets that Sandy and I stepped upon, which was just the way I like it. Gave me a sense of exploring the unknown. I saw that Fishtown’s byways are crammed with housing and commercial properties that, to my marginally-trained eye, looked to have been erected mostly between the mid 1800s and early 1900s. As with much of Philadelphia, the buildings usually rise no farther than three stories above ground level. And how about those bricks, a construction material that numbers in the gawd-knows-how-many trillions of units in Philadelphia. Fishtown’s share of that bounty must be at least twenty billion.

It would take hours to see all of Fishtown, hours that Sandy and I didn’t have at hand. But we strolled around and I think got a halfway decent sense of what the neighborhood is all about. I was glad to see that Fishtown is kind of a small town unto itself. That’s been the case for at least 150 years, from what I’ve subsequently read. Look! A library. A police station. A rec center with a hockey rink. A wonderfully-domed Presbyterian church that has been in place since 1859. A bunch of pocket parks. Sharp, indeed! But the small town feel disappears when you venture off the residential blocks. On Girard Avenue, a major artery that bisects the area, the almost endless lengths of overhead wires are a gritty spider’s web and a quaint-yet-quintessential urban sight. And the traffic on Girard Avenue and Frankford Avenue at times is relentless.

Let’s move on to food and drink. Fishtown has become a player in Philadelphia’s emergence as a destination for foodies and/or craft beer aficionados. Kraftwork, East Girard Gastropub, Frankford Hall, Fette Sau, Interstate Draft House, Pizzeria Beddia (a take-out-only joint with no phone and a policy of baking only 40 pies per day. It gained instant fame when bon appétit magazine, incredibly, crowned its offerings earlier this year as the best pizza in the USA). Hey, if filling the gut and loosening the inhibitions are on your agenda, Fishtown’s as good a choice as any to do that in.

I peeked inside some of the above-named places, and others, on Girard Avenue. They looked great, but it wasn’t even 5:00 PM yet and I wasn’t ready for alcohol or food. Sandy and I earlier had decided that we needed to patronize, or at least ogle, what probably are Fishtown’s two most well-known spots, just to say that we’d been there. And thus we headed north on Frankford Avenue till we reached La Colombe Fishtown (1335 Frankford Avenue), the crown jewel of the La Colombe coffee empire.

LCF opened last year and it’s a thing of beauty, a Starbucks-on-steroids enterprise that was created out of a former warehouse. It’s comfortable and fashioned in the rustic chic mode. Dark wood floors go on forever. Exposed air system ductwork looms overhead. At the tables, customers nurse coffees, wines, beers, pastries and sandwiches for a long long time as they stare into their electronic devices or into each others’ eyes. And in the rear of the cavernous space is something I’d have been unable to anticipate in a million years. A rum distillery. Don’t ask me why, but the brains behind La Colombe had a jones for rum that had to be satisfied. The rum is for sale.

Sandy and I, though, kept things simple. We ordered ice coffees. Yes, we’re big spenders. They were strong and delicious. We stared into our devices and into each others’ eyes for awhile, and then hit the streets once again. It now was time for food and alcohol. Next stop was Fishtown’s biggest claim to fame.

Johnny Brenda’s (1201 Frankford Avenue) used to be an insular neighborhood bar. New owners took over in 2003. They installed good beers and good food, made nice with their Fishtown neighbors, and set in motion their visions of expanding JB’s audience. Johnny Brenda’s is widely credited as the catalyst for Fishtown’s renaissance. Things really began cooking in 2006, the year that JB’s brought live rock and roll to its upstairs quarters. Brenda’s has become a favorite place for local and touring rock bands. Sandy and I have yet to catch music at JB’s, but we’ve frequently talked with friends about doing that. One day soon we will.

JB’s is a friendly place. It has a pool table, local beers on tap, a nice selection of pub grub. And plenty of customers. Sandy and I grabbed a booth in the dining room. We ordered. Sandy’s Italian white wine was delicious. So was my Sly Fox porter. So were our burgers, hers made from beef, mine from vegetables. But before too long it was time to leave, as a movie, in another Philadelphia neighborhood, was on our evening’s schedule. We settled up and stepped outside. Daylight had disappeared 90 minutes earlier.  The air was cooling down. Groups of 20-somethings and 30-somethings were everywhere. We crossed the street, heading westward on Girard Avenue. But Sandy then suggested that we walk back to where we had just been so that we could get another good look at a resplendent neon palace: Joe’s Steaks + Soda Shop. Sandy took its picture. And we left Fishtown on a high note. 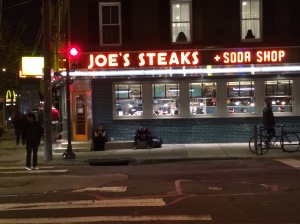 (If you enjoyed this article, then don’t be shy about sharing it. Sharing buttons are below)

(Photos by Sandra Cherrey Scheinin. If you click on a photo, a larger image will open)

8 thoughts on “Out And About In Fishtown”