I’ve been thinking recently about the nature of this blog. Not a whole lot, but enough to see that my stories — when you look at their sometimes straight, sometimes wavering and sometimes loopy as hell strokes — paint a pretty good picture of what I’m about. I’m not one to reveal all. I’ll never write a word, for instance, about the time, 40 years ago, when I went undercover in Nepal to help bring down the notorious Himalayan gang of bank robbers that dressed themselves in highly-convincing yeti costumes. Or about my space-boot shopping spree with Neil Armstrong a few days before he blasted off for the Moon. But I reveal plenty, I think.

Slices of life. Yeah, that’s what I usually find myself describing. And now that I’ve expended nearly 200 words in trying to establish a degree of context for this current opus, I’ll turn my attention in that direction. “Yo, you better, pal,” I hear a few voices saying. “Our time is limited. We’re this close to closing out your article and checking out some YouTube videos of skateboarding kangaroos.”

Right, right, ye whose attention span is shorter than Donnie Trump’s fuse (but not shorter than his dick). Here we go.

Last Friday I found myself heading north from my suburban Philadelphia abode. My car, having a mind of its own, drove itself two and a half miles to an establishment that ranks high on my ladder of places where I like to grab a bite for lunch. In fact, it probably is my favorite lunchtime eatery in my neck of the woods. And that’s because, speaking of slices, I believe that the slices of pie that one purchases at Nino’s Pizzarama are damn good. A card-carrying fool for pizza, I down them there two or three times a month (and I go to other pizza joints throughout each month too).

I ordered a slice of regular pie and one of Sicilian. They hit the spot regally, though I was slightly disappointed in the regular’s crust. Too chewy. The pie needed to have been left in the oven for another 20 or 30 seconds to become as crispy as it itself was hoping to become. Such is the life of pie. 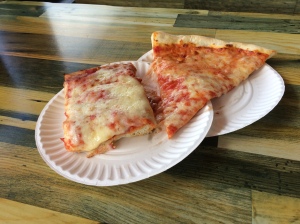 While munching away, I couldn’t get out of my head a song I’d heard on the radio during my northward trek. It’s a very beautiful recording, one that I instantly became attached to soon after its release in 1968: Hickory Wind, by The Byrds. As always, it sounded wonderful.

Hickory Wind comes from Sweetheart Of The Rodeo, a magnificent country-rock album. The Byrds, famed for earlier numbers such as the psychedelic nugget Eight Miles High and the folk-rock staple Turn, Turn, Turn, had undergone some significant stylistic and personnel shifts by the time it was waxed. Three of the five original members were gone and new guys, most notably the space cowboy Gram Parsons, who helped push the band partly into country-music territory, were on board. Parsons is one of rock and roll’s legendary names, not only for his big musical talents, but for his wild and wooly and troubled life. He died of a drug overdose in 1973.

Gram Parsons is credited with having written Hickory Wind in 1968 with his musical compadre Bob Buchanan. (There is a dispute over the song’s authorship, by the way. Some claim that a little-known folksinger named Sylvia Sammons composed it, and that Parsons stole it from her. The truth never will be known, it seems.) It has been recorded by many since then, but The Byrds put it out first.

What a song. Wistful and melancholy, it stands you up straight and makes you think about the times when loneliness and an aching heart might have ruled your days. That’s Gram singing lead. In the car I melted as I listened to his yearning voice and to the sad, sad notes coming from Lloyd Green’s pedal steel guitar. Man, you want to be in a happy mood when you’re eating pizza. But me, I sat at one of Nino’s tables in a contemplative frame of mind, not fully able to concentrate on the powers of sweet tomato sauce, excellent melted cheese and could-be-better crust.

There’s much to be said for contemplative, though. It’s a state that can be good for the inner being, helping us to put things in perspective and, if we’re lucky, softening our defenses. On the way home from Nino’s I turned on the radio and found myself on the receiving end of another helping of such as Horace Silver‘s Lonely Woman filled the car. Silver, whose rich 60-year career in the jazz world ended with his passing in 2014, composed and recorded Lonely Woman in 1963. It came out in 1965 on his most famous album, Song For My Father.

There’s little I need to say about the song. It is subdued and righteous and should be better known than it is. A trio (Horace on piano, Roy Brooks on drums, and Gene Taylor on bass) perform Lonely Woman, Horace having decided that the tune would benefit if saxophone and trumpet, which appear on the majority of his recordings, sat this one out. Less sometimes is more. What’s more, Horace plays straight through Lonely Woman’s seven-minute length, having further decided that neither a bass solo nor drum solo were appropriate. Hats off to that.

Slices of life. Slices of pizza. I’m sure a spot-on connection could be drawn between them, and that slice-y metaphors are out there ripe for the picking. Those with bulbs brighter than mine would have no trouble drawing and picking. Which is why I now shall quietly exit the stage, before long to return with another tale of the sublimely simple. Till then, amigos . . .

(Don’t be shy about adding your comments or about sharing this story. Thanks.)

64 thoughts on “Before, During And After Lunch: Slices Of Life And Of Pizza”