I shall begin the proceedings by stating that this story would not have come into existence were my wife Sandy and I not subscribers to The New Yorker magazine. Thus, if you read this opus and decide that it sucks, then sue The New Yorker, not me. As always, I’m blameless!

For it was about six weeks ago that I noticed the colorful back cover of the aforementioned magazine’s March 1 issue. That cover was an ad for Sumo Citrus, a variety of fruit that I’d never heard of before. Grown in California, it’s a large version of a mandarin orange, and boasts what pretty much looks like a top knot on its head. Sumo wrestlers sport top knots. Hence, the fruit’s name.

Anyway, not many days later Sandy and I were filling up our shopping cart at a Whole Foods supermarket when a table piled sky high with bright orange produce caught my eye. Holy shit, it was a Sumo Citrus mountain! Were we enticed? Yo, is the pope Catholic? So, overpriced though the fellas were, we purchased one. And ate it the next day. Yeah, it was seedless and easy to peel, as advertised, points definitely in its favor. But how about the taste? That’s the main thing, right? Well, the flavor was good. Quite good. But hardly a revelation. I mean, it tasted like an orange!

Whether we buy or don’t buy another Sumo Citrus some day, the fruit made a real impression on me because, subconsciously, the color orange remained on my mind. I love colors, just about all of them, and have published many essays on this site that revolve around one color or another: odes to blue, green, red and yellow come to mind. But I haven’t waxed poetic very much about orange. On April 5, a Monday, I decided that the time had arrived to do something about that.

In mid-afternoon of that day, off I went to Willow Grove Park, a three-story indoor shopping mall near my home in the suburbs of Philadelphia. From past experience, I knew that examples of just about every color under the sun can be found there, some on store merchandise and displays, some on signs, and some adorning the bodies of the mall’s employees and customers. 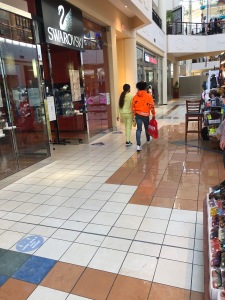 I spent an hour in the commercial wonderland, which, despite the pandemic, was as busy as I’ve ever seen it outside of the Thanksgiving and Christmas seasons. A diligent journalist, I kept my eyes focused on colors, rather than on cute girls, as I scoured the premises. Some hues definitely predominated: shades of white, black, blue, grey and red, I’d say. Orange wasn’t a member of the in crowd. In fact, only purple, by my estimation, was represented less at the mall than was orange. Nonetheless, I found a fair number of examples. They were hard to miss, so flamboyant is orange. 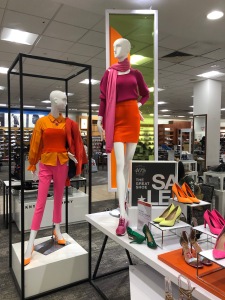 Macy’s department store carried some ladies’ clothes, shoes and accessories in knockout versions of orange, for example, and a small number of men’s shirts in same. A vendor in the mall’s food court had shelves filled with candy bars whose wrappers exploded in orange and in other hues. And a teenager, strolling the avenues with a young lady, shone like a star in his orange shirt. In fact, he was the only person I saw at the mall who wore any orange at all. Wait a minute . . . that ain’t true! Wandering around the mall was a f*cking weirdo whose orange, black and white mask covered half of his wrinkled face. It was good of him to stop and pose for a selfie for this story. If you surmise that the f*cking weirdo was yours truly, you possibly are correct. 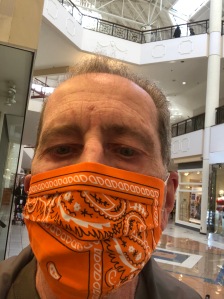 Why isn’t orange more popular in the USA than seemingly it is? Good question. It should be a hit. Orange is snazzy, jazzy and full of good spirits, after all. But maybe the American personality leans a bit too much toward the repressed side for orange to get its due. Its day may come, though. You never know. I’m pretty sure of one thing, in any event. To wit, my eyes will stay open for orange. Once you start looking for that color, it’s hard to stop.

I’m going to leave you with two recordings that pay homage to orange — to skies of orange, specifically. The first (Orange Skies) is by Love, a trippy rock band that was popular in the hippie era. They recorded it in 1966. The second (Orange Colored Sky) was put on wax by the one-and-only Nat King Cole in 1950.

Thanks for reading, girls and boys. Please don’t be shy about entering any comments you might have. Till next time!