Holy shit, being a writer can be numbing! That’s what I discovered a week and a half ago when I strolled around my neighborhood as darkness was settling in. Earlier that day my region had received its first snowfall of the winter (I live in a town near Philadelphia, Pennsylvania). Dedicated journalist that I occasionally am, I decided to see how the powdery white stuff looked in moonlight, and to document my walk in words and with photos.

Well, it took me only a minute to realize that I wasn’t in a winter wonderland. Yeah, there were several inches of snow on the ground, but the effect was much less charming than I’d thought it would be. And what I’d been hoping especially to see — softly glowing snow clinging to tree branches — was virtually nowhere to be found. The day’s steady breezes had emptied the trees. 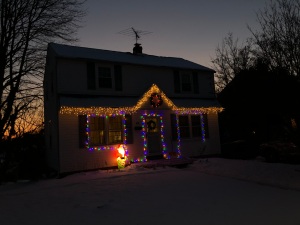 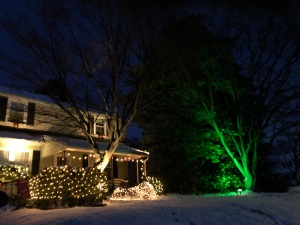 There were some worthy scenes, however. For instance, a number of households had not yet taken down their Christmas lights, so I stopped to admire those displays. And, 20 minutes into my walk, I watched a few kids sledding down the hilly front lawn of an apartment building. They were having fun. But you know what? I wasn’t! And that’s because my f*cking fingers were freezing!

Sure, I wore gloves during most of the walk. But I had to take them off every time I decided to snap a photo. Otherwise, there was no way I could have aimed my phone’s camera properly and pressed its button. Thus, my hands were exposed intermittently to 25°F (-4°C) air.

That shouldn’t have been enough to cause my fingers to become comatose. But somehow it damn well was. So, after being on the streets for almost half an hour, I knew I needed to get inside. Picking up my pace, I strode to my block. In front of my next-door neighbor’s home though, I chose, like a fool, to torture myself a little more by photographing the Moon, which was peeking through a tangle of tree branches. Then I walked the remaining 50 feet to my house, where I struggled to muster enough finger coordination to insert the front door key into its designated opening. Ten seconds later, finally, success! In I went.

Yup, having cold fingers sucks. Big time. On the other hand, having cold beers is a pleasure. In fact, it’s one of my greatest pleasures. I’d be in mourning if beer disappeared from the face of the Earth.

Though I’d enjoyed beer for many years (mainly mainstream lagers, such as Budweiser), my appreciation of the beverage rose to a higher level when, in my late 40s, I discovered that there were far more styles of beer on the market than I’d realized, and that the quality of many of them was steps above what I’d been used to. I have the craft beer revolution to thank for all of that. It began in the 1980s and really took off during the following decade, which is when I fell under its spell. Today, the revolution is at a high point. I mean, so many breweries worldwide produce primo beers.

Stouts, porters, pilsners, India pale ales (IPAs), and on and on . . . I pretty much like ’em all. And I look forward to downing one of them with dinner most evenings. I’m salivating right now, thinking about which brew I’ll have tonight. A quick look into the frig tells me my choice likely will be the Dogfish Head brewery’s 60 Minute IPA, an aromatic and seriously bitter quaff that’s refreshing as hell. I tell you, in these times of climate change, COVID, authoritarianism and racism, to name but a few problems bedeviling humankind, it’s wonderful to have something to look forward to.

The time has come to wrap things up. I’ll do so with songs that mesh, title-wise anyway, with this narrative. First up is Cold Fingers, by the late great Tony Joe White. Much of his music, Cold Fingers included, sounds primordial, as though it was born in our planet’s bowels. Tony Joe was something else. And then there’s Blake Shelton, a country music star and a pretty talented cat. Generally I’m not a big fan of today’s country music, overblown as much of it is. Though Blake’s Straight Outta Cold Beer leans in that direction, it tells a realistic story and packs a wallop. I like it.

Thanks for reading, girls and boys. Feel free to comment. Here are the songs: