No one ever said that finding a pawpaw would be easy, though the article (click here) published in the Philadelphia Inquirer on September 20 seemed to indicate that it wouldn’t be as tough as I’ve discovered it to be. Anyhow, search I did, coming up emptyhanded. Which is okay. You win some, you lose some, to toss in a cliché that’s hard to beat. But I haven’t given up the fight! No way. Pawpaw vibes are in the air. Someday, somewhere, I’m certain that I’m going to meet a pawpaw in the flesh.

“So, what the f*ck is a pawpaw?” you delicately ask. Well, everything that I know about pawpaws, which I’d never heard of before, comes from the short article mentioned above. It contains all that I need or want to know, as I like to avoid extensive, extended research whenever possible. That article, igniting a spark within me, sent me on a quest that has resulted in another pawpaw-related piece. Namely, the one you’re reading.

“So, what the f*ck is a pawpaw?” you delicately ask once again. Well, it’s an obscure fruit. It looks like a mango, has a tropical sort of taste, and is creamy in texture. Pawpaw trees are native to many eastern swathes of North America, and their fruit was popular with native Americans and with early colonists. George Washington, for instance, loved pawpaws for dessert. 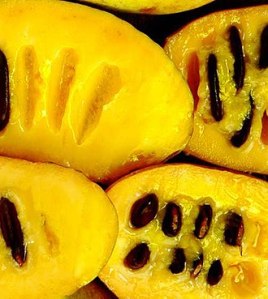 Whatever, it’s an undeniable fact that pawpaws are hard to come by. Sure, pawpaw trees exist in the Philadelphia region, in which I reside. There just ain’t a lot of ’em. If you know the right people though, or are in the right place at the right time, a pawpaw or two or more will be yours. The right time is now, by the way, since pawpaws are an autumn fruit.

The day after I read the article I left the house to try and find a pawpaw. If anyone near me carried the item, I figured it would be the Whole Foods supermarket about three miles away. They didn’t. “So, what the f*ck is a pawpaw?” two of the store’s produce department workers almost said to me when I made my inquiry. I tell you, I was surprised not to have success at Whole Foods. I mean, they carried cherimoyas and jackfruit, which were new to my radar screen, so why not pawpaws? Ah, the mysteries of life.

A half hour later, at my local Giant supermarket, I also ran into a dead end. Phone calls would be easier and quicker than driving around, it then dawned on me. So back home I called Weaver’s Way Co-Op in Ambler, a town seven miles from mine (the several branches of Weaver’s Way were noted in the article as possible purveyors of pawpaws). The guy I spoke with was full of information. Yeah, he said, they’d received a 10-pound shipment of pawpaws a few days earlier. And sold them all that same day. He had no idea if or when they’d get any more of the bad boys. Not many pawpaw trees are under cultivation, he told me. I thanked him, hung up, and placed a few more calls.

They proved to be fruitless. Creekside Co-op, three towns distant from mine, had never heard of pawpaws. Neither had the Trader Joe’s or the Wegmans supermarket in my area. Neither had the branch of Weaver’s Way located in Philadelphia’s Chestnut Hill neighborhood. Nor the Produce Junction a seven-minute drive from my house.

Hell, that about did it for me. I mean, often I’m a glutton for punishment, but occasionally I know when not to keep beating my head against the wall. There are at least 12 other stores with creative produce sections that I could have dialed. But all of them are 10 or more miles from me. Even if one of them had pawpaws in stock, was it worth a long roundtrip to obtain the fruit?

And so ends my pawpaw saga. For now. When the day arrives that I cross paths with a pawpaw  (and I know I will, as I’ve already stated), I’ll work that magnificent occurrence into a story. Even if it doesn’t fit I’ll shove it in! I’m fairly good at that, you know.

As for now, I’m rapidly tiring of writing about pawpaws. It’s refreshment time. Goodbye till we meet again, amigos. I’m about to ease my busy fingers from my computer’s keyboard and head into the kitchen to pop open a bottle of the king of beverages. Beer. I’m sure that it will taste at least as good as a pawpaw would. Skoal!

(Don’t be shy about adding your comments. I thank you.)